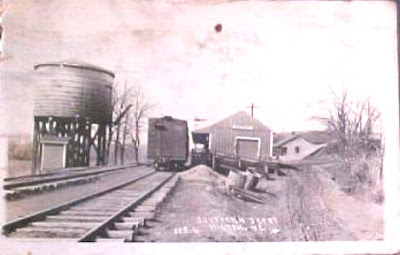 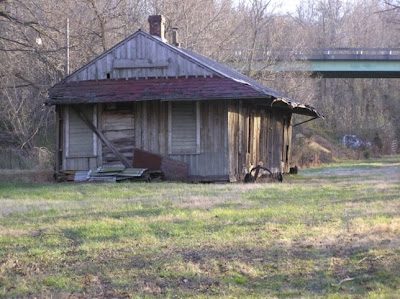 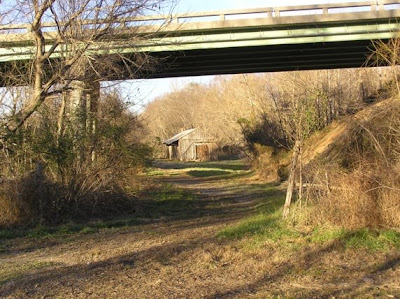 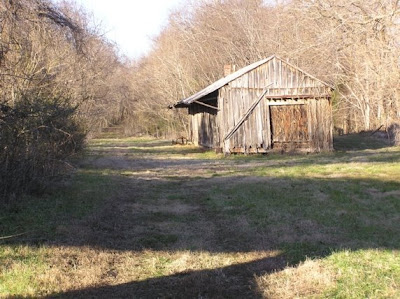 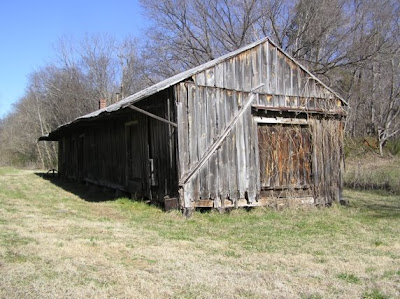 Down the hill from the Milton Methodist Church there was a narrow little muddy red street, probably never more than a lane for wagons or buggies heading to the depot at the foot of the hill. On a fairly high bank to the right of this street was a boardwalk that ran all the way to high steps at the foot. The bank at the bottom was covered by pillar roses, white with red edges and beautiful. Down there was the railroad station known to us as the depot. There were several trains through per day and many of them were passenger trains. This was the chief mode of travel to Danville and elsewhere until the late 1920's. The depot was a fairly long building. One half of it was waiting rooms for passengers, divided down the middle with whites on one side and coloreds on the other. In each side was a pot-belly iron stove for winter, and nothing to help with the sweltering heat of summer. The station agent's office was in this section with the constant clacking of the telegraph machine. The other half of the depot was for freight, and was used until the railroad was discontinued at a great loss to the area.


Across the tracks was the water tank, a huge tank maybe 15 feet above the railroad for replenishing water to the train. As any water available the boys of the community used this tank to dive into and not with the blessing of the railroad company. They used it to skinny-dip, much to the chagrin of the neighbors who lived nearby. One woman remarked that it would not have been so bad if the boys had not yelled out just as they dived and, of course, they looked and were embarrassed.

The Section Foreman's house was beyond the depot toward Country Line Creek. The Dalton family were the only ones who lived there in my memory, and how I loved to go there. "Captain" Dalton was the foreman of the group of men who kept the tracks in good order - the rails, the cross ties, the growth that could cover the tracks. There was a section at Blanch and another at Semora. Early on they used little pump cars and at the last used a pickup truck that rode the rails. One night I was spending the night with Katherine McGee (The Daltons were her grandparents) and we were sleeping on a pallet by the front screen door because it was summer. When the train came sometime in the middle of the night I was the only one to wake and I have never seen such a huge machine close up. It was the old time steam locomotive with the cowcatcher on front, and hissing steam. Spectacular and never forgotten!!!

A little farther along the tracks and in the corner of the highway was another house and the Booths lived there. This was Evelyn Gusler and her family. That was an interesting house and always seemed to be perfectly clean and always quiet. Several other families lived there before the house was taken down when the present bridge was built.

Down near the Dan River in a tiny house that hung out over the bank lived Mr. Draper who took the toll for the bridge. There was a chain across the road and he sat on a bench and charged each car that crossed. Often someone would either undo the chain before he could get there or would ram it and ruin his day.

While we are still down by the river a word needs to be said about the bridges that have spanned it. Early on there was a ferry, but by my time there was a one-way bridge and woe to him/her who was not good at backing up because sometimes one or the other driver had to back off. A second bridge, also secondhand, was brought in. This was higher from the water, but still one-way. Flood stages of the river often covered the road and cars could be caught in the rising water. On the night before we were married John and I drove down to see if we would be able to get out of Milton in that direction after our wedding.

"Milton Memories" is reproduced here with the permission of The Caswell Messenger, which retains all rights.