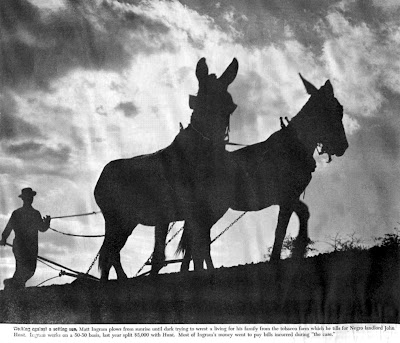 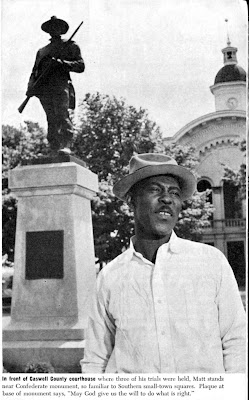 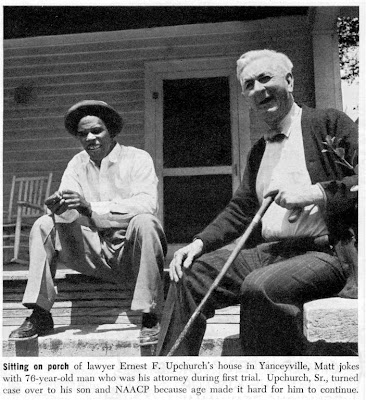 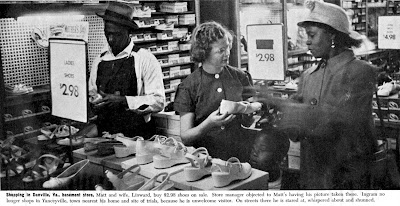 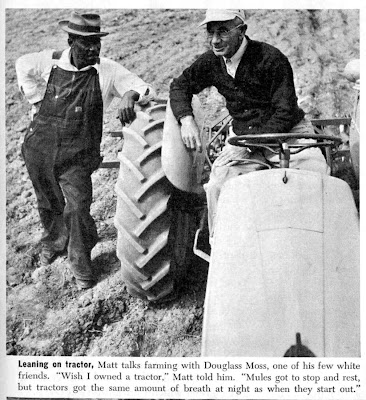 All the preceding photographs are courtesy of Ebony magazine, which retains all rights. The photographs appeared in the September 1953 issue of Ebony ("What Happened to Matt Ingram?"). 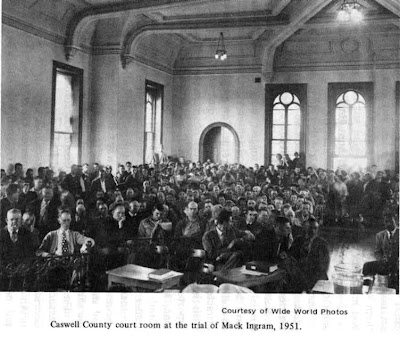 From the Magazine | National Affairs


Around Caswell County, N.C., Mack Ingram, 44, was known as a "good" Negro. He had raised nine children, saved enough to buy his own mule and tools, and even a ramshackle jalopy. He was proud that he rented his land instead of sharecropping.

One day last month Ingram stopped at the farm of Aubrey Boswell, a white neighbor. He wanted to borrow a trailer to haul his hay. Ingram saw one of the Boswell children walking toward the tobacco barn carrying a hoe. He walked across the road, he said, and through a field knee-high in corn, looking for Boswell. When he got closer and saw only "three boys," he turned back. He went on down the road and borrowed a trailer from someone else. Later that afternoon, two deputy sheriffs arrested him. One of the "boys," they said, was 17-year-old Willa Jean Boswell, dressed in dungarees and terrapin shell hat. Farmer Ingram was charged with "assault . . . with intent to commit rape" against her.
Last week in the county courthouse, Recorder (roughly comparable to justice of the peace) Ralph Vernon heard Willa Jean's story. "As I got off the road, he came up the highway and he kept watching me," said Willa Jean. "And I ran through those woods because I was afraid . . . and I kept going, walking fast, and he kept coming on, and I got a pretty good ways ahead of him and he stopped and stood and watched me." Then, said Willa Jean, "I looked back and didn't see him any more and I stopped there and was hoeing the ground, and as I was hoeing I asked my two brothers who that was and they told me, and I told them what happened and they went running to tell Daddy." Willa Jean said she burst into tears.

The defense had only one point to make: What did he do? Said Willa Jean: "He kept watching me." Just how close did Ingram get to her? Willa Jean wasn't sure; "within 25 to 50 feet," she thought.
Prosecutor W. Banks Horton argued that Ingram must have been trying to head her off, that young womanhood must be protected from "niggers." But Recorder Vernon, who is a farmer with no formal legal training, could plainly see that there was no ground for a charge of intended rape. If there were, the case would have to go before a superior court—and a jury. Instead, he found Ingram guilty of "assault on a female," and sentenced him to the maximum: two years of hard labor on the roads.
The verdict didn't even make the local papers. But outsiders got wind of it; Caswell County was deluged with inquiries, one even from the U.S. State Department. The Daily Worker seized on it. The National Association for the Advancement of Colored People, after first making sure that the Communists' legal beagles didn't get in on the case, decided to help Ingram in his appeal.
From the 23 July 1951 issue of Time magazine. Shown here courtesy Time Magazine, which retains all rights.
_______________

Monday, Nov. 24, 1952 For the third time in 17 months, Mack Ingram, North Carolina Negro farmer, went on trial last week, charged with assaulting a 17-year-old tobacco grower's daughter, although he had not been within 50 feet of her at the time. In the first trial in recorder's court, Ingram explained that he had mistaken blue-jeaned Willa Jean Boswell for one of her brothers, had started to follow her across a cornfield to ask if he could borrow the family trailer. When she took fright and ran, he turned back to his car. The judge, acting on the basis of a North Carolina law that says assault can be committed even without physical contact, sentenced Ingram to two years in jail (TIME. July 23, 1951). Last November, Ingram's appeal went before a mixed jury (four Negroes, eight whites) in a state superior court; when two of the Negro jurors held out for acquittal, the court ordered a mistrial. Last week an all-white jury in Yanceyville reviewed the evidence again. The tobacco grower's daughter, now married and the mother of a six-month-old child, insisted that Ingram had "leered" at her. The jury's verdict: guilty. The court's sentence: a suspended six-month jail term and five years' probation.From the 24 November 1952 issue of Time magazine. Shown here courtesy Time magazine, which retains all rights.
_______________

Monday, Mar. 09, 1953 "If, by ... looking at a person in a leering manner, or watching and then following, one causes another to become frightened and run, then he is guilty of assault," said the judge to the jury in the superior court in Yanceyville, N.C. last November. The all-white jury promptly found Mack Ingram, a Negro farmer, guilty of "assault" against Willa Jean Boswell, daughter of a neighboring white farmer—even though everybody agreed that Willa Jean had safely run off across a cornfield, and Ingram was never closer than 50 feet to her (TIME, July 23, 1951). Last week, on appeal the North Carolina state supreme court resoundingly reversed the lower-court conviction. Said the supreme court: even if Ingram had leered (which he denied), there had been "no overt act, no threat of violence ... We cannot convict him . . . solely for what may have been on his mind. Human law does not reach that far."
From the 9 March 1953 issue of Time magazine. Shown here courtesy Time magazine, which retains all rights.
_______________ 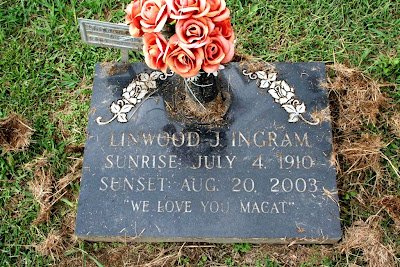