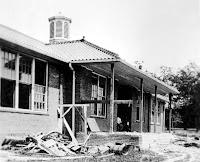 The purpose of this article is to document the history of the Bartlett Yancey High School in Yanceyville, Caswell County, North Carolina. While incomplete, it nevertheless is being published in an effort to encourage others to contribute material.

The Yanceyville Male Academy was chartered in the 1840s, headed by Archibald Lindsey. After 1910, it became the Yanceyville Academy (co-educational) and the only public school in town. The last graduating class is believed to be that of 1923. The old Yanceyville Academy building was used as a teacherage (boarding house for teachers) after the new Bartlett Yancey School was built nearby.

The following is from The Heritage of Caswell County, North Carolina, Jeannine D. Whitlow, Editor (1985) at 678 ("Honoring the Last Graduation Class of Yanceyville Academy, 1923"):

"The Yanceyville Academy was organized and built in 1840 as the the Yanceyville Male Academy. The schoolmaster was A. C. Lindsey. By 1900 [1910] the Male Academy was dissolved and the school became the grammar school for both boys and girls of Yanceyville with the high school added later. The last graduating class in 1923. Back row: Glenn Reagan, Earmine Poteat, Tom Jones. Front Row: Alfred Bradner, Laura Oliver, Henry Gwyn, Hansford Bradner, James Mitchell and Frederick Upchurch. Not pictured are Erastus Massey and James Slade."

Mattie Hatchett Womack Allison (1873-1954) donated the land on which the Bartlett Yancey School was build. She was Mattie Hatchett and married twice: first to Thomas Pancoast Womack (1861-1916) and second to Edgar Archibald Allison (1879-1955). A condition of her gift was that the school be named for the grandfather of her first husband. This grandfather was, of course, Bartlett Yancey, Jr. (1785-1828). The school initially covered grades one through eleven, there being no twelfth grade nor, as far as I know, a designation as the Bartlett Yancey High School -- all the grades were in one building.

This building, a photograph of which will be found at: Caswell County: Images of America, Caswell County Historical Association (2009) at 44, now is referred to as the old Bartlett Yancey Elementary School building (dismantled in the 1950s). This is because the high school was separated from the lower grades in, I believe, 1935/1936, when the first high school building was erected. This is the building that burned 5 July 1970 (then being used as part of the elementary school).

"The Caswell News for September 16, 1887, reported that the Yanceyville High School had just opened in August with separate rooms for boys and girls and that it was able to prepare them for the junior class in 'colleges of high standing.' The school had primary and intermediate departments and offered advanced work in English and higher mathematics. Latin, French, Greek, and German courses were available without charge. J. C. Pinnix, Jr., appears to have been in charge."

This most likely was a "private" school in that tuition was charged (the school not being supported by public funds).