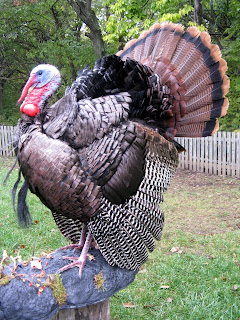 The following is found in Byrd's Line: A Natural History, Stephen Conrad Ausband (2002):

"10 October 1728: A small distance from our camp we crossed a pleasant stream of water called Cockade Creek, and something more than a mile from thence our line intersected the Dan. It was about two hundred yards wide where we forded it, and when we came over to the west side we found the banks lined with a forest of tall canes that grew more than a furlong in depth. So that it cost us abundance of time and labor to cut a passage through them wide enough for our baggage."

This is an excerpt from The History of the Dividing Line betwixt Virginia and North Carolina. Run in the Year of Our Lord 1728, William Byrd [Edited by Louis B. Wright. The Belknap Press of Harvard University Press, 1966].

A cockade is a knot of ribbons, or other circular-shaped or oval-shaped symbol of distinctive colors which is usually worn on a hat. A male turkey grows a cluster of long, hairlike feathers from the center of its chest. This cluster is known as the turkey's beard. On adult males, these beards average about nine inches long. Thus, Byrd and his men were wearing these feathers on their hats when in 1728 they came upon what today is named Country Line Creek.
_______________

Country Line Creek rises in southeastern Rockingham County and flows northeast across Caswell County into Virginia where it enters the Dan River north of Milton. It is mentioned by this name in local records as early as 1752 and was probably named from the eighteenth century custom of calling the North Carolina-Virginia line the "country line," as the two colonies were regarded as different countries. Country Line Creek clearly has been a source of good fishing for many years. In December, 1777, Richard Moore, one of Caswell County's first two members of the new State House of Commons, introduced a bill to prevent the obstruction of fish passing up Country Line Creek but his bill was rejected.