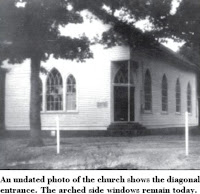 On Aug. 5 [2012], Baynes Baptist Church will celebrate 100 years of service to the Lord. A special worship service will be held at 11 a.m. with guest speakers Joe Grubbs of Semora Baptist Church and former pastor, Col. Larry McCarty, U.S. Army (ret). Rev. Grubbs grew up at Baynes and his parents [Joseph Elliott Grubbs and Willie Frances Roberts] were very dedicated members. McCarty served as the church’s pastor from December 1988 until January 2000. He then became an Army chaplain at Fort Bragg. While at Fort Bragg he served as senior pastor at the Main Post Chapel and the 82nd Airborne Memorial Chapel. He also deployed to Iraq with the 16th Military Police Brigade and the 18th Soldier Support Group. McCarty came off active duty in 2011, and began his ministry as senior pastor of First Baptist Spring Lake, N.C. that April. Following the worship service, “dinner on the grounds” will be held in the church fellowship building, followed by a concert by “Called Out.”

Recognizing a need for a house of worship for the Baynes Community, a group met together on Aug. 4, 1912 in a one-room schoolhouse near Baynes Store. These people held letters from other Baptist churches and became the charter members of the churches. The members from Kerr’s Chapel were:

Those members from Mount Adar Church were:

Beulah Baptist Church was represented by:

Mr. A. A. Baynes donated one acre of land on which to erect the church. The contractor of the church was David Fitch of Burlington. The church members donated building supplies as well as helped with the construction. The State Baptist Mission Board also contributed funds to construct the church. The foundation and pillars of the church were constructed in 1913. The actual construction started in May of 1914. The cornerstone of the church was laid by the Masons of Caswell Lodge No. 539. The original church building was a one-room wooden structure and was heated wish a wood heater. The structure had two front corner double door entrances. Gothic style windows were installed - and they are still in use today. However, when the church was later remodeled, memorial windowpanes were installed. The original ceiling was wooden covered by blue tin squares. The baptistery was a four-feet deep well of brick and stone located under the pulpit covered with a trap door. The water was supplied by a downspout from the roof. The lights for nighttime services were kerosene lamps bracketed to the side walls. The records indicate that the church was called Baptist Memorial Church. The name would later change to Baynes Chapel Church and finally to Baynes Baptist Church.

The first pastors to have served the church were:

Claudius Murat Murchison (1912-1918). The first pastor called was Claudius Murat Murchison. He served from 1912-1918. He graduated from what was known then known as Wake Forest College and has served churches in Catawba and Lincoln County. He was leader in the Beulah Association. [Also served at the First Baptist Church of Yanceyville.]

In the late 1940s, Trinity and Thompsonville would each call a full-time pastor of their own. Baynes and Kerr’s Chapel would share a pastor until 1976, when each church decided to have their own full-time pastor.

In 1946 Mr. and Mrs. Ira Samuel Stanfield donated 1.08 acres on which to construct a parsonage. The finances for the parsonage came from church members and friends of the church. It was completed in 1948. Over the years Baynes membership would continue to grow and additional facilities were added. There would be more land given to the church. In 1956 the church was brick veered and extra rooms for Sunday school were added. Memorial stained glass windows were also added. In 1965 a fellowship hall was constructed. The church sanctuary would be renovated with painting, carpeting, lighting and air conditioning in 1977. A baptistery was installed in memory of Milas Lee Green and Haywood Lee Green. The church added a new roof, wheelchair ramp, and porticoes in 1985. It was during this time that a steeple was donated as a memorial to Odell King. In 1994, the church built a 4,500 square foot multipurpose facility. Due to the blessing and faithfulness of the Lord, each construction loan was paid in full earlier than the due date.

A Legacy of Love 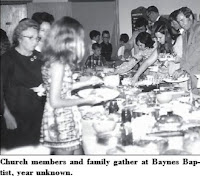 The true church is not just building facilities but it is in the hearts of the people who gather and worship the Lord. The members continue to live out the legacy of love that has lasted for 100 years. On the 50th anniversary of the church, Rev. Robert Ayers would add to the church records the following statement:

“May we remember those who laid the foundation for us to build upon today. God has blessed this church through the years, and we believe He has many things to give us and many and much work to be done until He comes for us. What will be said of us if and when Baynes Baptist Church comes to observe its 100th year? It remains to be said, but it remains in our hands.”

What will be said of the church when the church observes it 150th anniversary? May the members remain faithful and continue to do the work of the Lord.
_______________ 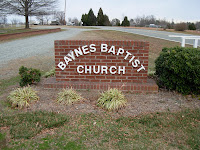 Baynes Baptist Church at Baynes (Anderson Township) in the southern part of Caswell County, North Carolina, was established on August 4, 1912, and the church building, still in use, was built in 1914. The church has been modernized and enlarged, and in 1952 it was brick veneered. It has Gothic-style stained glass memorial windows. The records of Baynes Baptist Church for the period 1912-1965 have been microfilmed. The earliest grave in the cemetery is from 1923.