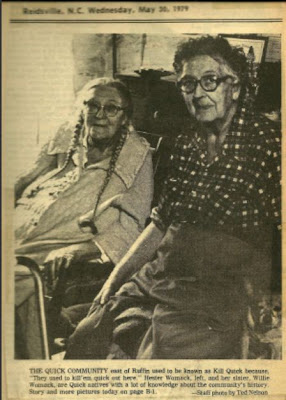 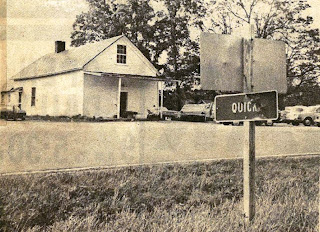 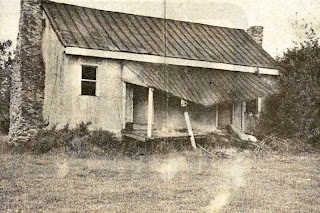 The Old Quick Store (first store photo above) still stands at the heart of the Quick community in Caswell County. The run-down building (second store photo above) was once known as the Row Town Store, but today is used only as a storage building. Staff photos by Ted Nelson.
_______________

QUICK -- Just over the county line from Ruffin lies a peaceful Caswell County farming community known as Quick. Although most people in the area have always been peace loving farmers, raising tobacco or cattle, the reputation of the cross-roads community, at the end of the Ruffin-Quick Road, was once a bit different. Folks around here say the settlement used to be known as Kill Quick until the name was shortened to Quick years ago, and it was called Kill Quick, some say, because, "They used to kill 'em quick out here." A nearby community used to be known as Row Town because some residents there would cause disturbances, brawls and commotion. Both communities apparently were dubbed with the unflattering titles because of incidents which occurred many years ago at two country stores -- one at Kill Quick and the other at Row Town.

The two buildings are still standing today. The Quick store was used for years as a Ruritan Club meeting hall. Now it is being used for storage by a nearby auto garage and it was decorated and used for a party this month after the Bartlett-Yancey Senior High prom. The old Row Town store sits decaying near the edge of the highway on the Ruffin-Quick Road.

"You could buy anything you wanted" at the Quick Store, according to William Hodges, a citizen at Quick.

Around the turn of the century, before Prohibition and passage of other liquor laws, the Quick store was licensed and the owner sold whiskey over the counter. And some local residents say drunkenness led to trouble in the area, and soon people began to refer to the communities as Kill Quick and Row Town.

Quick resident Buddy Lillard says his great uncle, Ed Blackwell pulled teeth inside the store when he owned the building. He surmised that whiskey was used by Blackwell as an anesthetic to help a man forget the pain while a troublesome tooth was wrenched from his jaw. The whiskey was legally manufactured in Kill Quick with a government licensed still which was near the store.

A circus used to come to the community, Lillard said, and area residents always had plenty of ice year-round because huge chunks of ice were sawed during the winter from a pond below the Quick store. The ice was placed in an underground pit nearby and it would be available all summer long.

Hester Womack, who will be 89 in June and has been Quick News correspondent many years for The Reidsville Review with the help of her sister, Willie, 83, says that although the Quick store belonged to Ed Blackwell, it was operated for years and years by Albert Lillard who was the store clerk. While Lillard was the clerk, residents bought all their groceries and supplies at the Quick store. The store also served as a rural post office where one cent would buy a post card and a stamp for a letter was only two cents.

Many people in the neighborhood used barter to obtain food from the store. After the turn of the century, Miss Hester Womack said, "women in the neighborhood would send eggs to the store to exchange for groceries. "Our fondest memories of that store was a big wooden bucket of the best candy manufactured. It was set up on the counter and they let them (children) get a piece of candy," said Miss Willie Womack. In those days salted herring could be purchased at the country store for a penny each. A local family once bought a bushel basket of the fish for a dollar, she recalled.

Misses Hester and Willie Womack were raised, along with their late sister, Edna, and late brother, Rufus, in the house where they still live near the former Row Town store. None of them ever married. "It took us all to make a living," said Miss Willie Womack. "I led several to the altar, but someone else led them away." The two women said they do not know much about the history of the Row Town store. It has been used as a dwelling during their lifetime and it is presently used to store feed again.

The Womack's home was built around a long cabin which may be over 200 years old, Miss Hester Womack said. The living room is the sturdy cabin with walls made of hewn logs which are still exposed and were whitewashed many times in the past. "This room was built for the clerk (of the Row Town Store), Grandleson Mitchell," Miss Hester Womack said. The store was also operated by Jim Scott Blackwell.

Times were not always easy when the Womack sisters grew up in the Quick Community. Their father, Joseph Felix Womack, died at age 38 when he contracted typhoid fever while helping care for cousins in the Milesville section of Caswell County. The cousins took typhoid during a local epidemic. Miss Willie Womack was only two when her father died and Miss Hester Womack was seven. They were raised by their mother, Betti Stubblefield Blackwell Womack, who cared for them and lived with her family until she died in 1965 at age 98 1/2.

The girls all taught school in local one-room school houses. Miss Hester Womack began teaching and taught for 15 years after she went to Reidsville Seminary for a year and a half and obtained her teaching certificate. Miss Edna Womack went to school for teacher's training at Blackstone, Va. Female Institute. Miss Willie Womack attended classes at Red Springs Prep School for a year and a half, took two weeks of further training in Yanceyville and received her second grade teacher's certificate.

After teaching seven years, Miss Willie Womack took a business course at McClung's Business College in Greensboro, obtained her diploma, and got a job in Madison at Gem Dandy Inc. where she worked for over 37 years until she retired.

Their sister, Edna, taught school for six years. After teaching, she studied nursing at Watt's Hospital in Durham, was assistant superintendent for a year at Watt's, was a nurse in the UNC-Chapel Hill infirmary for 20 years and later nursed in the Boy's Industrial School at Beaumont, Va.

Miss Hester Womack taught school 15 years, but at the end of her teaching career she returned home to stay with her mother.

Their brother, Rufus, was a Caswell County Deputy Sheriff. He had a stomach ulcer which ruptured while he was in London, Ontario, Canada helping to cure tobacco. He was hospitalized there for six weeks and died three years later in 1948 in North Carolina.

Quick is filled with memories for the Womacks and their neighbors and though they may travel from the community -- most folks around the area will always call Quick, North Carolina their home.