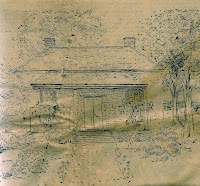 Your letter dated the 23rd and received tonight is the greatest comfort, and I hope before this that you have received Mr. Lilly's letter and some of mine.... If you have received any letters you have learned that our loss was comparatively small. Many of our friends have lost everything. Thanks to our kind brother S. I got, the night before the enemy, came a barrel of flour and four or five bushels of meal. They only took part of the flour and five pieces of meat when an officer came and placed a guard for our protection. I treated the guard as well as I could and they did me good services especially during the burning of the arsenal dwelling houses.

The back part of our garden with the adjoining camp was the hospital. Two graves are in Mrs. Moore's garden and one in Pearce's field, but we have nothing but a horse buried in our garden. Of course the fences were burned, but the boys with a little help have got some sort of a fence up. Mother stood it wonderfully and was frightened during the fire and then I sent her to Mrs. Worth's. The stores were all emptied. Brother S has lost everything except what was in his house. Mother's crib was burned and all cotton too but the house was not. Will Baker's father-in-law had ten minutes given him to get out of his home before it was burned. Mr. Horne had rope tied around his neck to make him tell where his liquor was stored. John Waddier was killed. The suffering in the county was on the whole worse than in town, tho many in town were stripped of nearly everything.

Mr. Lilly came to see me yesterday. I think he is despondent. The gentlemen are more so generally than the ladies, and it must have been harder trial to them to be plundered and robbed and insulted and not able to do anything but submit. I am glad you were not here, but I do yearn to see you again. I not say come for fear you might be taken prisoner.

. . . . I feel so thankful that we have our home and if we are only safe will not care how poor we are when we get together. We fed a great number of our soldiers that passed through. A wounded Lieut of Wheeler's cavalry occupied the parlor. I was fixing a shirt for him when word came that the yankees were in town. He was in his saddle and off in a few moments and believe escaped unless he was one of those killed at J. C. Smith's. There were seventy wounded up there and the country cleaned of everything.

I feel very sorry that Mrs. Hale is going to leave us and know you will too. Peter is going into the army. Dr. H lost a great deal. He had gone into the country and buried his silver but it was found. I hope you did not bury anything. I talked a good deal to the guard and felt sorry for some of them. They felt they were doing wrong. They were very much afraid of our army, especially Wheeler's Cavalry. The latter attacked Kilpatrick's Camp fourteen miles west of us and took three hundred prisoners and rescued some of our men. 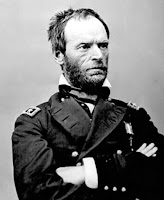 3. General William Tecumseh Sherman reached Fayetteville on March 11, 1865, and set up headquarters in the old U.S. arsenal. Fayetteville received harsh treatment at the hands of Sherman’s army, not only because it was a stronghold of confederate loyalty but also because it allowed the bridge across the Cape Fear River to be destroyed. General Sherman issued specific orders as to what property was to be destroyed in Fayetteville. He issued special field orders, No. 28, which instructed the destruction of all railroad property, all shops, factories, tanneries, etc. All of the above property was destroyed and much more. A lady living near Fayetteville told the following story of a visit from Sherman’s “bummers.”

“There was no place, no chamber, truck, drawer, desk, garret, closet or cellar that was private to their unholy eyes. Their rude hands spared nothing but our lives. Squad after squad unceasingly came and went and tramped through halls and rooms of our house day and night. At our house, they killed every chicken, goose, turkey, cow, calf and every living thing, even our pet dog. They took from old men, women and children alike, every garment of wearing apparel save what we had on. Such as it did not suit them to take away they tore to pieces before our eyes.”

4. Fayetteville Arsenal. Sherman entered Fayetteville on March 11, 1865 and took possession of the Arsenal (which had been stripped of its arms, munitions, and useful machinery by the retreating Confederates). The Harpers Ferry rifle manufacturing machinery was said to have been hidden in the Egypt, NC coal mines. Continuing his scorched earth policy, Sherman ordered the Arsenal razed to the ground. His soldiers used railroad rails as battering rams to knock the building down then set the remains on fire. As the fire raged, some remaining artillery shells exploded and completed the devastation. Very little remains at the actual site today due to the construction of a central business district loop road through the area in 1988. There is one remaining partial frame outbuilding and a historical marker, and other remnants of the U.S. Arsenal can be seen on display at the Museum of the Cape Fear Historical Complex. The foundations of the buildings that were located along the back wall of the arsenal, including the foundations of two of the towers, can be seen in the park located behind the Museum of the Cape Fear.

Before Sherman's arrival many Southern women worked at the Fayetteville Arsenal, turning out the .58 caliber lead ball cartridges called "minnies" as well as rockets and shells. Approximately 900,000 rounds of small arms munitions were manufactured at the Fayetteville Arsenal over a seven-month period in 1864. Much of the arsenal's machinery was manufactured at Harper's Ferry before the war.

5. The Wheeler's Cavalry referred to in the letter was the Confederate calvary corps of General Joseph Wheeler (1836-1906). During his career in the Confederate States Army, Wheeler was wounded three times, lost 36 staff officers to combat, and a total of 16 horses were shot from under him. Military historian Ezra J. Warner believed that Wheeler's actions leading cavalry in the conflict "were second only to those of Bedford Forrest."

6. The reference to Kilpatrick probably is Major General Hugh J. Kilpatrick. After days of skirmishing with each other since entering North Carolina, MG Hugh J. Kilpatrick's Cavalry and LTG Wade Hampton's Cavalry raced for Fayetteville. Despite orders from General Sherman not to force the Confederates to battle, Kilpatrick tried to block three roads to stop the advancing Confederates. On the night of 9 March 1865, Kilpatrick set up camp at the abandoned Charles Monroe farm, the same campsite Hampton planned to use. Kilpatrick didn't seem to care about the Confederate threat, but Hampton was much more serious and planned a dawn attack. As the attack commenced, the Federals were taken completely by surprise and were routed from their camp. The Confederates, more interested in plundering the campsite, failed to follow-up the attack. This gave the Federals time to launch an effective counterattack that eventually forced the Confederates to withdraw from the battle.
Posted by RSF at 4:21 PM