Lea Bethel Baptist Church was established on December 29, 1883, at its present site, with land deeded by Mr. and Mrs. J. W. Allen. The original church building was a one-room frame structure. it also was an offspring of Beulah Baptist Church. On May 21, 1939, a new church building was organized in the Lea Bethel Building. Mr. Noell was the moderator of the Beulah Association at that time. At this first meeting, Mr. Tom Murray was elected moderator, and Mr. B. C. Woody as clerk. Church records indicate an initial enrollment of thirty-seven members, with five additional members by letter. it was decided by the membership and the Beulah Association's moderator that it should be named Old Lea Bethel Baptist Church. The first pastor was Rev. C. E. Sullivan.

Some of the first church policies included the following: There would be a total of three deacons to serve. These first three were elected at a business meeting held on Sunday, May 28, 1939. They were Mr. S. M. Wilburn, Mr. Harvey Oakley, and Mr. Tom Murray. The first church treasurer was Mr. Tom Murray. Services were held once a month on the 4th Sunday afternoon. Pastor Sullivan's starting salary was $100.00 per year. The first revival was held the first of July with the pastor presiding. Services were held at 6:30 and 8:00 p.m. This first revival was successful in winning twelve more people to Christ. The first baptism was held on the 5th Sunday of July, 1939.

On December 10, 1939, a special conference was called in order to discuss holding two services a month and raising the pastor's salary to $150.00 a year. Pastor was serving a total of three churches at the time. They were Old Lea Bethel, Theresa, and Beulah. Old Lea Bethel's services were to be held at 11:00 a.m. on the 2nd Sunday of each month and at 3:00 p.m. on the 4th Sunday.

Old Lea Belthel did participate at this point in helping to pay for the pastor's rent. Mr. Nat Wilson offered to build a parsonage and rent it to Mr. Sullivan at a cost of $8.00 per month. One-third of that for Old Lea Bethel amounted to $2.70 a month, with the other churches paying the same.

About 1948, some financial problems surfaced. The pastorate already replaced by Mr. J. A. Dunevant recommended some new financial arrangements. At this point, Old Lea Bethel began 1/2 share of cost basis rather than one-third, as Mr. Dunevant only pastored two churches, Old Lea Bethel and Beulah. An offer was made by the board of the Association along about June 1948 to Mr. Dunevant and Beulah to become a field in the Association. The two churches made an agreement to become one field together on July 18, 1948, but some agreements were not settled, and the papers were returned unsigned. On July 25, 1948, the church was told by Mr. Dunevant that the board had accepted their offer , and it was agreed for him to go ahead and sign the papers. At this point, Mr. Dunevant also started field work and full time pastorate position holding services every Sunday. Old Lea Belthel's services were held first and third Sunday nights at 7:00 p.m., and second and fourth Sunday mornings at 11:00 a.m.

Talk of a parsonage was brought up in July 1948, but was tabled until a later time. Old Lea Bethel did finally participate in the building of a parsonage, but eventually sold out their share to Beulah.

The church continued to grow, and in January 1963, two new Sunday School rooms were built. Additional land was donated by Mr. and Mrs. Ernest Rudd and Mr. and Mrs. Warren Wade for this expansion. 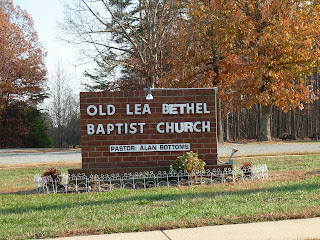 The first well for drinking water and other purposes was dug. One additional long room was added to the back around 1970. Because of physical and spiritual growth, plans were begun for a new church building in 1977. The original sanctuary was torn down by volunteer members of the church. They were the Thaddeus Pleasant family, the George Chambers family, the Ellis Pleasant, Jr., family, Flint and John Russell, and Jerry Thompson. This was done last after the removal of the back side Sunday School rooms. The back room was sold to Mr. Theodore Watson and moved by him to be used as an addition to his home. The side rooms were donated by the church, one to Mr. and Mrs. Ernest Rudd, and the other to Mr. and Mrs. Warren Wade. Mr. and Mrs. Rudd accepted the donation. Mr. and Mrs. Wade thanked the church for their offer, but refused it for health and other reasons; so the room was sold to Mr. Walter Oakley for a small donation, and used as an addition to his home.

The new building was completed in early 1978, and a dedication service was held on May 7, 1978. Rev. John Hancock, the pastor at that time, along with three former pastors, were in attendance. Also present was Mr. Hassell Lamb, Sr., Director of Missions.

At present, Old Lea Bethel Baptist Church is still small, but the Lord has graciously blessed its members.

Here is a brief history of the WMU of Old Lea Bethel Baptist Church. It was begun 64 years ago, in 1947, and was known as Women Missionary Society. The ladies met once a month on a Saturday afternoon, while the children played in the yard. At the meeting the ladies had a devotional, learn about missions, planned meals for the sick of the church, had a “pounding” for newlyweds, and prepared gifts for an upcoming holiday. The numbers were 16 in 1955 and 19 in 1956. In the late 1970s it was reorganized as the Women Missionary Union, as it is known today.