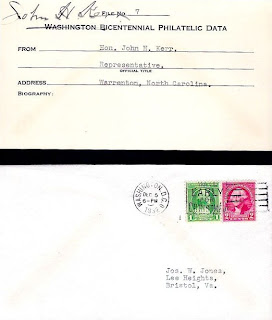 Delegate to the Democratic National Conventions in 1932 and 1940; chairman, United States delegation to the Inter-American Travel Congress in Mexico City in 1941; elected as a Democrat to the Sixty-eighth Congress to fill the vacancy caused by the death of Claude Kitchin; re-elected to the Sixty-ninth and to the thirteen succeeding Congresses and served from November 6, 1923, to January 3, 1953; chairman, Committee on Elections No. 3 (Seventy-second through Seventy-fifth Congresses); unsuccessful candidate for renomination in 1952; died in Warrenton, N.C., June 21, 1958; interment in Fairview Cemetery.
Posted by RSF at 9:19 PM