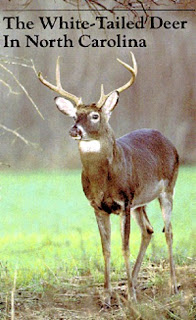 Before the law of deer hunting without dogs, in its heyday about 35 years ago it was fascinating just to be at the former Thaxton's Store during hunting season. Though hunters didn't kill as many deer years back as in present day, it was an event. The store was the mecca of activity.

Along about the same time, CB radios became very popular. You had to learn a whole new language. The radio would be on, and you could hear what direction the dogs were running. When they were in the immediate area driving, you could hear the trucks coming - at least five or six in a row. When hunters brought a deer to be registered, the crowd would go to the back of the truck to look at the deer and talk about how wide the spread of the antlers and how many points the rack had. If by chance, another hunter brought another deer on the back of his truck, the same crowd would go see that deer also and do the same thing. This is not an opinion about hunting with dogs, but during hunting season it was fun, somewhat like killing hogs, like I've written about before.

I believe it was the first or second Saturday after the deer season ended, the Prospect Hill Hunt Club would host a deer supper at the American Legion Building on Highway 86 South, to show their appreciation to land owners for letting them hunt their land. The hunter would skin the deer and have deer barbecue. To cook the deer, they used the fat from the port meat. Other than being a darker and drier meat, you couldn't tell the difference. The menu, if I remember correctly, was your choice of deer or port barbecue (or you could get both), potato salad, slaw, baked beans, tea or drinks. Loaves of bread were placed along the tables also.

About when all had eaten, a drawing would be held for two or three prizes for lucky ticket holders. If my memory serves correctly, one of the big prizes some years was a freezer and the next was a television and even some years were gas cards. This event was something my parents looked forward to for a number of years. My daddy (Warren Wade) made the comment, the supper was like Christmas, because you got to visit with old friends.

A couple I remember talking to was the late Larry and Beverly Hester of the Hester's Store community. They were readers each week of the "Frogsboro News," so you see it had to be in the 1980s because I started writing this column in June of 1984.
Posted by RSF at 12:28 PM