CBS News correspondent Byron Pitts was an intern at WTVD in 1980. His mentor was reporter Larry Stogner.

A college intern walked into the Raleigh newsroom of WTVD in 1980 for his first day of work and immediately was chewed out by reporter Larry Stogner for being late. Even though he wasn't. Then Stogner asked him to make coffee. Before long, Stogner asked him to buy him some cigarettes. That was the beginning of a beautiful relationship. Really. Thirty years later, the intern, Byron Pitts, is chief national correspondent for "CBS Evening News" and a contributor to "60 Minutes," the brightest stage for TV journalism. And Pitts and Stogner are so close they consider each other family. Their story shows how an eager student and a generous mentor can lift each other and forge a bond that lasts forever.

Pitts is smooth now. Back then he was raw. He was a slight, shy kid who didn't truly learn to read until he was 12. As a college student at Ohio Wesleyan, he was working to overcome stuttering. But when he showed up in Raleigh to work with Stogner, he was hungry to learn. Stogner was impressed by Pitts' earnestness and impeccable manners. "He was just absorbing everything," Stogner said. "I remember what a sweet kid he was. I could tell how well he was brought up." Pitts' parents divorced when he was a boy. He grew up in a working-class neighborhood in Baltimore but spent summers with relatives in the Friendship community near Apex. His mother, the unstoppable Clarice Pitts, a former social worker, lives there now and has for years. Byron Pitts was in Raleigh last week to talk about his new book, "Step Out on Nothing: How Faith and Family Helped Me Conquer Life's Challenges." In the book, Pitts recounts that first meeting with Stogner, who was gruff and demanding from the start.

Last week, after reading from his book to a standing-room-only crowd at Quail Ridge Books, Pitts said at first he was scared of Stogner, who was tall and stern with a booming voice. And yet, Pitts said, in some ways he liked Stogner immediately because he reminded him of his mother, also a forceful person. Pitts said Stogner, like Clarice Pitts, "was clear about his expectations." I chuckled when he said that. I'd never heard anyone put it quite like that. For those of us who grew up with old-school parents, they were clear about their expectations, weren't they? Pitts followed Stogner and his cameraman everywhere, lugging equipment. Pitts remembers it as one of the best summers of his life. "The statehouse one day, a murder scene the next," Pitts wrote, "and I had a front-row seat with one of the finest reporters in North Carolina." 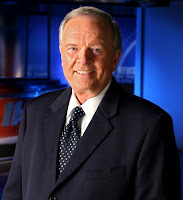 Stogner was a good teacher. He would tell Pitts about the person he was getting ready to interview, what he was going to ask and how the interview might play out. Pitts became a good writer; Stogner says he might be the best writer at CBS News. And Pitts says he used Stogner's on-air style as a model for his own. Pitts is now 49 years old. Stogner, who moved to the anchor desk at WTVD in 1982, is 63. They e-mail regularly and get together from time to time. Last week Pitts accompanied Stogner, a Vietnam War veteran, to classes at Millbrook High School, where Stogner was talking about that war.

They call each other "Skip" because - uh, it's a long story that one of them would have to tell. You know how old friends are. In his book, Pitts tells about all the people who helped him along the way. Every time he most needed guidance or inspiration, someone emerged. In 1980, it was Stogner. "He had no reason to help me," Pitts said, "but he did."
Byron Pitts benefits from that every day.

So does Larry Stogner.

Permalink
Posted by RSF at 4:15 PM