There are countless springs around Caswell County and many of them are well known locally for their association with certain families or events. Two, however, were of enough significance that their waters were analyzed early in the twentieth century and described in a publication of the Geological and Economic Survey of the state. Strader's Spring, located about two and a half miles northwest of Pelham was one. The second spring described in the report was Park's Spring, six miles east of Pelham where the water comes up beside a small creek into a section of terra-cotta pipe. In this case the spring was clean and well maintained, the water being so popular among those in the surrounding country and as far away as Danville, Virginia. The analysis of Park's Spring water was similar to that of Strader's Spring; in this case there were 33.7 parts lime per million and 14.1 of soda.

"There is a mineral spring six miles northwest of Yanceyville, belonging to Mr. Jno. S. Park, brother of B. F. Park of Raleigh, which for its tonic, alterative and diuretic properties is attracting considerable attention. It is used with marked success in dyspepsis, indigestion, diseases of the urinary organs, and nervous prostration. It is carried from the spring by persons at a distance. It does not deteriorate or become impure when kept in glass vessels closely corked."

In 1881, Park's Spring was managed by T. H. Park. Thomas H. Park is the son of the John S. Park referenced above. In the 1920s and early 1930s the property appears to have been owned by Judge Cox Womack of Danville, Virginia. As of August 5, 1927, it was managed by B. A. Murray. In 1938, the Danville Kiwanis Club purchased the Park's Spring property, apparently from J. M. Berry. The Danville Bee article reporting the sale stated that in the early years of the Spring it was managed by the late E. C. Arey. Note that Judge Cox Womack was in business with one or more people named Arey Danville, Virginia (Womack & Arey Shoe Co. at 212 Craghead Street). The current owner of the Spring property (as of June 2016), the Piedmont Christian Assembly, acquired the Spring in 1976. Whether the Piedmont Christian Assembly purchased the property from the Danville Kiwanis Club is not known.  However, in 1971 the Kiwanis Club advertised that the property would be sold at auction. Whether this auction resulted in a sale is not known. If so, the Piedmont Christian Assembly may have purchased the Spring property from the auction purchaser.
_______________

1923 - The announcement of the opening of "Parks Spring Beach" for the summer of 1924 stated that it was where "many found relief during the hot evenings last Summer." The announcement was made by J. C. Womack (Judge Cox Womack).

1924 - In April, J. C. Womack advertised for rent the "Hotel at Park Springs," noting that a lady tenant with home cook experience was preferred.

1931 - J. C. Womack advertised for rent a farm at Park Springs, including a big pasture and two dwellings.

1938 - Danville Kiwanis Club purchased Park's Spring from a J. M Berry, who "operated a cabaret and had staged several boxing bouts there." When J. M. Berry obtained the property is not known.
1962 - The obituary of Judge Cox Womack provided: "He along with the late K. C. Arey and E. C. Arey founded Park Springs and he managed the project for a number of years." Womack was in business with an Arey (or more than one) in Danville, Virginia, trading under the name of Womack & Arey Shoe Co. (212 Craghead Street).

1976 - Piedmont Christian Assembly purchased the Park's Spring property. The seller is not known.

Post Office, Pelham. These springs are located six miles east of Pelham, but do not seem to be used much as a resort. The waters, however, are used commercially, and are highly recommended by physicians of North Carolina and the neighboring States in chronic
constipation, dyspepsia, and portal congestion. The following analysis was recently made by Prof. Albert R. Ledoux, Ph.D., of the State Agricultural Experiment Station at Chapel Hill:

One U. S. gallon contains:

The water bears some resemblance to the well-known Hunyadi-Jauos Water of Hungary. 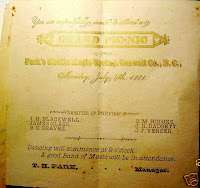 Dancing will commence at 9 o'clock. A good Band of Music will be in attendance.

No matter what the road sign says, which is correct historically? 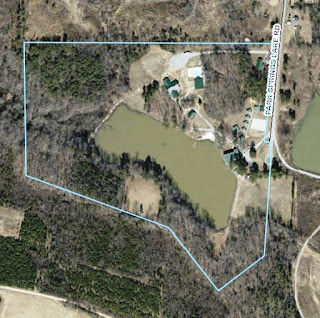 My grandfather was the caretaker of the Park Springs Camp for 30 years way back in the day. Below the dam for lake there used to be a large ball field where all the locals gathered on weekends to play baseball. My father played baseball in this natural ball park. Also, on the outer fringe of the ball park was a natural spring with a spring house built over it. I have toted many buckets of water up to my grandparents house from this natural spring. It is still there to this day and flows clean as ever.

There was only one spring house. There was a ground level concrete pad about 15 feet square with a roof and sides built around the spring, to keep it clean. The spring was in the middle of the pad with about 5 or 6 concrete steps going down to the spring water level. The opening at the bottom of the steps was about 3 feet, the water was clear, still and very deep. I would just dip my buckets in and lift them out. This was my grandparents only source of drinking water for as long as I can remember. There could have been more natural springs in the general area, but only one was fully developed for everyday use as a water supply. This water was really good and I drank plenty of it.

NC DOT tore down the famous Arch over the Park Springs Lake Road over 30 years ago when the road was widened and paved which proudly said Park Springs. With the Kiwanis Club symbol between Park and Springs. A championship boxing match was held in the old Park Springs gym in the 40s. When I was a kid one of the boxers came by Millners Store. He was in his 80s. He had the biggest boxing ears from getting hit from punches. Never forget got my butt whipped for staring at his ears. Source: Armstead Hodges Post to the Caswell County Historical Association Facebook Page 27 June 2016.
_______________

Thanks for all the useful comments. Based upon your input and the published items posted here, there apparently is only one developed spring. The earliest name associated with the spring is Jno. S. Park in the 1877 newspaper article quoted above. A later name associated with the spring: T. H. Park. The 1938 deed to the Danville Kiwanis Club might be instructive, and hopefully someone can visit the Register of Deeds Office in Yanceyville. The newspaper report of the sale indicates the owner was J. M. Berry. Accordingly, until more is known, the most historically correct name appears to be #1 Park Spring Road or #3 Park's Spring Road.
_______________ 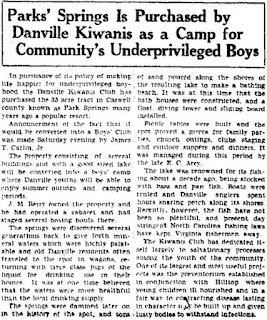 The Danville Kiwanis Club purchased the property in 1938, with part being used for under-privileged boys. Click on the article to see a larger image.
_______________

In pursuance of its policy of making life happier for underprivileged boyhood the Danville Kiwanis Club has purchased the 35 acre tract in Caswell county known as Park Springs many years ago a popular resort. Announcement of the fact that it would be converted into a Boys' Club was made Saturday evening by James T. Catlin, Jr. The property consisting of several buildings and with a good sized lake will be converted into a boys' camp where Danville youths will be able to enjoy summer outings and camping periods. J. M. Berry owned the property and he had operated a cabaret and had staged several boxing bouts there.

The springs were discovered several generations back to give forth mineral waters which were highly palatable and old Danville residents often traveled to the spot in wagons, returning with large glass jugs of the liquid for drinking use in their homes. It was at one time believed that the waters were more healthful than the local drinking supply.

The springs were dammed later on in the history of the spot, and tons of sand poured along the shores of the resulting lake to make a bathing beach. It was at this time that the bath houses were constructed, and a float, diving tower and sliding board installed.

Picnic tables were built and the spot proved a mecca for family parties, church outings, clubs staging and outdoor suppers and dinners. It was managed during this period by the late E. C. Arey.

The lake was renowned for its fishing about a decade ago, being stocked with bass and pan fish. Boats were rented and Danville anglers spent hours snaring perch along its shores. Recently, however, the fish have not been so plentiful, and present day stringent North Carolina fishing laws have kept Virginia fishermen away.

The Kiwanis Club has dedicated itself largely to salvationary processes among the youth of the community. One of the largest and most useful projects was the preventorium established in conjunction with Hilltop where young children ill nourished and in a fair way to contracting disease lasting in character, now is built up and given lust bodies to withstand infections. 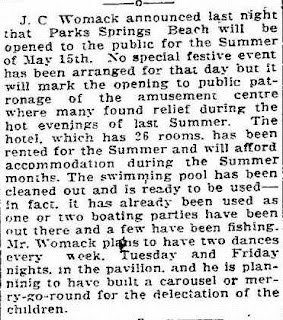 "J. C Womack announced last night that Parks Springs Beach will be opened to the public for the Summer of May 15th. No special festive event has been arranged for that day but it will mark the opening to public patronage of the amusement centre where many found relief during the hot evenings last Summer. The hotel, which has 26 rooms, has been rented for the Summer and will afford accommodations during the Summer months. The swimming pool has been cleaned out and is ready to be used--in fact, it has already been used as one or two boating parties have been out there and a few have been fishing. Mr. Womack plans to have two dances every week. Tuesday and Friday nights, in the pavilion and he is planning to have built a carousel or merry-go-round for the delectation of the children." 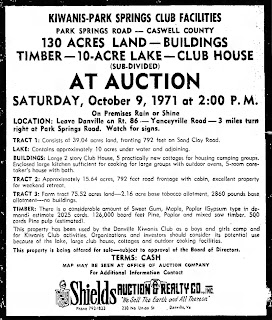