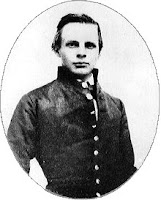 Caswell County, North Carolina, is divided into nine townships. Pelham Township, in Caswell's northwest corner, was named in honor of Confederate Lt. Colonel John Pelham (1838-1863). He was Major Pelham when killed at the Battle of Kelly's Ford, being promoted posthumously to the rank of Lt. Colonel.

The following is from The Heritage of Caswell County, North Carolina, Jeannine D. Whitlow, Editor (1985) at 51 ("Naming of Pelham" by Mrs. Louise Fitzgerald):

Richmond & Danville Railroad Co. had a contract with the Confederate Government to build the line from Danville to Greensboro for a loan of one million dollars in Confederate bonds. The Piedmont Railroad Co. was formed to do this work and the road was mortgaged to repay the loan. Capt. Edmund Myers of the Confederate Army was detailed to supervise the construction.

At a meeting of the board of Directors of the Piedmont Railroad Co., at the office of the Company in the town of Danville, Va. on Wednesday, the 9th of September 1863, the minutes read as follows:

"On motion of Thomas P. Atkinson -- Resolved that the name of Pelham be given to the first Depot on the Piedmont Railroad in honor of the late gallant Major Pelham who lost his life in defense of his country at Kelly's Ford."

Permalink
Posted by RSF at 5:02 PM