Red House Community Back on the Map
© The Caswell Messenger (Yanceyville, North Carolina) 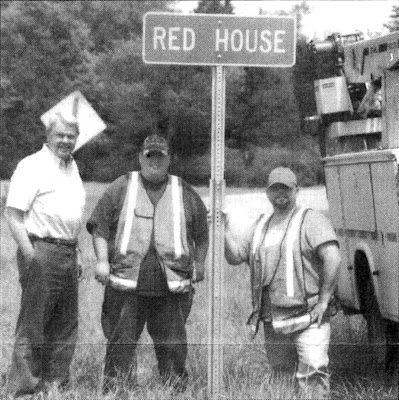 The Red House Community near Semora is back on the map, more than 100 years after it became a forgotten destination. The name of the community came from a noted inn constructed there before the American Revolution. The inn was painted red and was a popular state coach stopping place between Hillsborough and points north in Virginia and beyond. Referred to by locals and travelers as Red House or Old Red House, the inn provided many social opportunities including parties, weddings and horse racing. History indicates the inn existed as early as 1740 or 1750 when great numbers of Scotch Irish immigrants followed the Great Wagon Road from Pennsylvania through Virginia and entered North Carolina north of modem day Winston-Salem. Although most of those immigrants continued into the Yadkin and Catawba valleys of western North Carolina. a few families turned eastward and traveled as far as "the old Red House."

By 1755, a number of families had settled near Red House and formed a church, which was first called Hico Church. Later its name was changed to Red House Church. In researching the history of Red House Church for listing in the National Register of Historic Places, retired Superior Court Judge lames M. Long learned of the great importance of the Red House community in colonial frontier days. It was a landmark on travel maps. He has old correspondence addressed to his ancestors at Red House, North Carolina. Although there is no record of a post office at Red House, mail was delivered by stage coach or horseback before the days of a national postal system.

On Monday, April 24, 2006 workers of the NC Department of Transportation erected a new highway sign at Red House, giving recognition to the community, which was such an important place before the American colonies gained their independence from England. According to Long, some neighbors are asking why the sign is located in a vacant field where there are no houses. "The answer is simple," he said. "The sign is located where our research indicates the Red House Inn stood near an important intersection of roads which no longer exist." He said he hopes the new sign will remind community residents of the important history of the area and renew their interest in community affairs.
_______________