Caswell county voted in the affirmative on the proposition to tax itself to build the Milton & Sutherlin Narrow Gauge Railroad. This short line will connect Milton with Danville, the main market for the productions of Caswell county.

For a history of the legal steps taken to create and eventually discontinue the Milton & Sutherlin Narrow Gauge Railroad Company see: Harrison, Fairfax. A History of the Legal Development of the Railroad System of Southern Railway Company. Washington, D.C.: The Transportation Library, 1901: 252-255. Print.
_______________

Caswell County suffered economically because it lacked adequate transportation infrastructure to attract industry. Several attempts were made at railroads. All eventually failed. One, the Milton & Sutherlin Narrow Gauge Railroad, became operational in 1877 but was out of business by 1895. It ran seven miles from Milton to Sutherlin, Virginia, which was on the Richmond & Danville Railroad. Bonds were issued to finance the railroad's construction.
_______________ 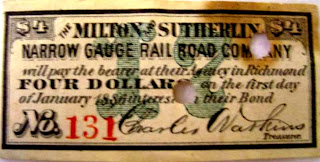 Permalink
Posted by RSF at 2:37 PM