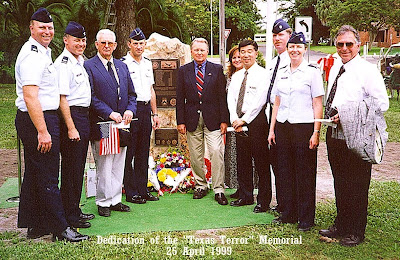 Crash of the "Texas Terror"

Dewey Glenn Hooper died in an airplane crash in the mountains of Australia during World War II. The wreckage was not found until 1959. A 1940 Elon College class ring was found at the site bearing his initials. Elon College was notified, investigated, and identified the owner of the ring as Dewey Glenn Hooper. The dead co-pilot's brother, Charlie Woodrow Hooper, who operated a gas station in Anderson Township (Caswell County, North Carolina) called Hooper's Store, was notified of the find. In 1999, Charlie Woodrow Hooper flew to Australia to the site of the crash. The class ring, other artifacts, and photographs are on display at Elon College.