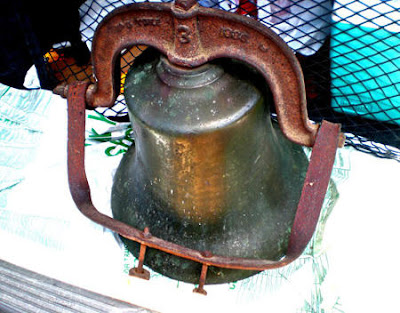 The following is provided courtesy of the Greensboro News & Record (Jim Schlosser, 21 September 2009). That the James William King mentioned is the James Wil King of the Caswell County Family TGree hass not been confirmed (as the dates are not consistent), and the article is placed here for research purposes only.


The story has been told and sung a million times, the wreck of Old 97, which plunged off a trestle north of Danville, Va., on Sept. 27, 1903. Among the 11 dead was the locomotive’s fireman, J.A. Clapp of Guilford County. What most people don’t know about the wreck is how the facts got mangled afterward, even in the famous ballad recorded by Roy Acuff, Hank Williams Jr., Woody Guthrie, Boxcar Willie and others. First, engineer Joseph A. “Steve” Broadey wasn’t found dead in the locomotive with his hand still on the throttle, as the song says. Newspaper reports say he was thrown from the engine. Second, disagreement remains on how fast Old 97 — also known as “The Fast Mail” — was traveling when it went down a hill, turned a curve and entered 75-foot-high Stillhouse Trestle. The song says Broadey had the locomotive doing 90 mph. Another report said 70 mph. Newspapers cited witnesses who gave figures ranging from 35 to 50 mph. Regardless, Broadey was supposed to cross the trestle at 15 mph.

Southern Railway (now Norfolk Southern) at first said the train wasn’t going too fast and wasn’t under orders to speed up to reach Spencer, 166 miles away. The train, running an hour late, had a reputation for always being on time. It better be on time. The post office fined Southern for each minute The Fast Mail ran late. Two men claimed authorship of the song, and it took a lawsuit to settle that. “Encyclopedia Virginia” says David G. George of Pittsylvania County, Va., was the author. Finally, there’s the train bell — or what may be the train’s bell. It will be on public display this weekend for the first time at The Depot. Gene Lewis, a chiropractor and vice president of the Greensboro Chapter of the National Railway Historical Society, says visitors will be told the bell has not been authenticated. It will be a conversation piece to highlight the chapter’s open house to collect railroad memorabilia.

The society asks visitors to bring railroad artifacts — hardware, papers, letters, photos — to be donated or to be copied, photographed and returned on the spot. Oral histories from old railroaders will be welcomed. The Carolina Model Railroaders’ elaborate layout also will be on display. Lewis says any donated artifacts of historical significance will be given to the Greensboro Historical Museum. Others will be kept by the society for display at the Model Railroaders’ headquarters. Now, back to the bell. The story goes that 18-year-old James William King of Caswell County on the Virginia border was in Danville at the time of the wreck. He was hired to clean up debris. He came home with the bell, which weighed about 85 pounds, and presented it to his family. He said it had been given to him for helping with the cleanup. The bell has been in the family ever since, and is now owned by Ed Powell of Alamance County. Powell is the son-in-law of James King, who died in 1938. But wait. The wreck’s ruins attracted thousands of spectators and scores of photographers. “Every picture we have seen has the bell still there,’' Lewis says. He says Powell has made every effort to authenticate the bell and sincerely believes the bell rang on Old 97 — and it may have.

“I don’t have any doubt that this is the bell on that locomotive,” Powell says, adding if someone can prove him wrong, he’ll accept the verdict. He believes the bell was removed after all the picture-taking of the wreckage was done. Lewis says that may be the case. He doesn’t know when some of the photos he has seen were taken. The answer probably can be found in a big room in Atlanta packed with uncataloged Southern Railway archives moved there after Southern and the Norfolk & Western Railroad merged in the 1980s. Lewis believes paperwork related to repairs to Old 97 would list what remained of the engine. Fireman J.A. Clapp, whose hometown has been given as Gibsonville, Whitsett and Greensboro, left a fiancee behind, a Greensboro school teacher. “She never married,” Lewis says. “She loved him that much.”

Broadey was a seasoned engineer but new to the curvy route on Southern’s Washington-to-Atlanta main line. Southern Railway later took back its denial that the train wasn’t speeding. It blamed Broadey, alleging that the engineer had the locomotive running 70 mph at times. Gene Lewis says the families of crew members killed received a death benefit of $10,000 from the railroad — except for Broadey’s. They received nothing. Contact Jim Schlosser at 601-9879 or beale1@clearwire.net
_______________

Permalink
Posted by RSF at 8:36 PM