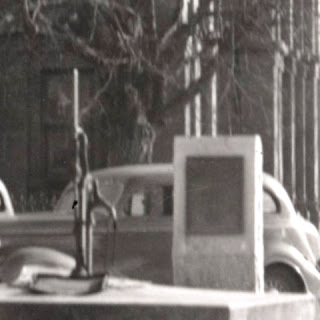 Remember the public well that stood on the northwest corner of the public square? In the 1920s and 1930s it had a green pump for drawing water. A trough was nearby for dogs and horses to get a sip. The well also has a history. At the 1852 October meeting of the county court it was ordered that a committee be appointed to receive propositions and contract for sinking a public well on the public square.

In April 1853 the justices ordered the committee to contract for a metallic pump for said well and the contract given to William Lockhart to dig the well was altered. In October 1853 Lockhart was paid $195 for digging the well. Also it included pay for building a house over the well. Apparently the pump was not satisfactory for in July 1855 Joseph J. Yarbro offered to give another pump. In July 1856 Thomas B. Atkins was paid $51 for replacing the pump. More trouble? In 1860 Atkins was ordered again to contract for repairing the well and enclosing it. Lastly in 1869 A. A. Mitchell was allowed $65 by the County Commissioners to put a new pump in the well in Yanceyville and he contracted to keep same in good order.

The pump is now gone -- the old well covered with ground and grass. One must remember that before 1920 the entire public square in Yanceyville was dirt -- no pavement -- one could ride straight through the public land. It was not until 1921 that the streets were paved -- the public square enclosed with cement and the Confederate Memorial Monument erected. 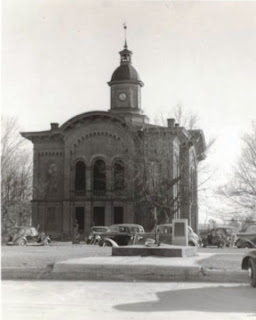