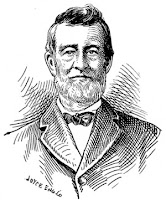 Reverend Albert Gallatin Anderson was born in Caswell county, North Carolina, December 20, 1813, and died July 13, 1893. He was educated at the University of North Carolina and received in 1884 the degree of Bachelor of Arts. He was twice married: first to Mary Thach; and second to Fannie Thach, June 4, 1885.

He studied law which profession he practiced for several years. In 1850, the North Carolina and Virginia Conference was held at Union chapel, and in connection with this Conference a camp-meeting that resulted in a glorious work of reformation. On Sunday, September 22nd, upward of three thousand people were upon the grounds. "It was truly an interesting sight and reminded one of the Jewish feast of tabernacles in the wilderness." Both ministers and members were engaged in the work. At 11 o'clock, Rev. I. N. Walter preached, and Rev. Thomas J. Fowler in the afternoon. At night, Rev. Jesse K. Cole preached an excellent sermon, at the close of which thirty came forward for prayers. Monday the interest increased. At 11 o'clock, Rev. Walter preached again, and the Lord attended the Word with the power of the Spirit: "about fifty came to the altar for prayer; and among the number were some very promising young men." The desire and prayer expressed was that the "mantle of some of the old veterans" would fall upon "young prophets, to be as flames of fire in this day of trial and darkness."

It was at this series of meetings that Rev. A. G. Anderson was converted and that he connected himself with the church at Union. From this time forward he became active in church work. He represented his church in Conference at Apple's chapel in 1851, and was chosen moderator. In 1857, he was elected president of the annual Conference which met at Bethlehem, and also at this Conference being recommended by his church at Union, he was duly licensed to preach the gospel. For some years he was associated with Rev. John R. Holt in conducting the Graham Institute. He was ordained October 9, 1858; the Conference met this year at Pope's chapel in Granville county, North Carolina. His first charges were the churches at Concord, and Lebanon, Caswell county. At the Conference at Union chapel, in 1859, he was the chairman of the committee to whom was referred the report of the Conference executive committee in regard to an accused brother; and the gentleness of his spirit permeates the report signed by him:--


"We, your committee, beg leave to report: That we have patiently examined all the certificates produced by the accused party, and also all the parole evidence that the accused party desired to introduce in his case; and after the most patient hearing, and actuated by the most prayerful desire to do as we would be done by, we are constrained (however painful it may be) to say that the evidence adduced in the case proves the accused guilty of a want of that strict veracity and truth that a gospel minister should possess, and consequently recommend that Conference withdraw permanently from him his license to preach under the authority of this Conference. All of which is respectfully submitted." A. G. ANDERSON, Chairman.

In 1860, at the Conference at Pleasant Hill in Chatham county, Rev. A. G. Anderson was appointed on a committee to recommend a suitable course of study for young men preparing for the ministry. He was also re-elected president of the Home Missionary Society of the North Carolina and Virginia Christian Conference, which was held in connection with the Conference, usually on the last day.

Rev. A. G. Anderson was one of the committee, appointed in 1866, at the Conference at O'Kelly's chapel, to recommend a judicious plan for the organization of Christian churches among the colored people within the bounds of this Conference. At the Conference in 1867, at Union in Alamance county, he served on the committees on religious exercises, education, and memoirs; and in 1868, at Salem chapel, Forsyth county, he was elected president of the Conference; and in 1870, president at Union chapel, Halifax county, Virginia. He served on the educational committee almost continuously from his first appointment till 1888. In 1872, at the Conference at Shallow Well in Moore county, North Carolina, he preached the introductory sermon from 2 Tim. 4:2.

The Missionary Society of the Conference having ceased operations for several years, he endeavored to revive it by introducing, in 1875, at the Conference at Pope's chapel in Franklin county, the following: "Resolved, That the president appoint a committee of five to report a plan to Conference for the organization of a Missionary Society for this Conference." He served on the committee appointed to district the churches, in 1878, at the Conference held at Damascus in Orange county. In 1879, he preached at Apple's chapel, Concord, and Bethlehem; in 1880, at Bethlehem, Concord, Shallow Ford, and Apple's chapel; and in 1884, he preached at four churches and built two new houses of worship. At the Conference at Union, Alamance county, in 1884, he acted on two committees, one on the standing of the ministry, the other an ordaining presbytery. The last two Conferences which he attended were held at Hayes' chapel, Wake county, and at New Providence, Alamance county, in 1885 and 1886, respectively. When no longer able to attend in person, he reported himself by letter. To the Conference held at Hanks' chapel, Chatham county, in 1889, he wrote a letter from which these words were taken: "Have been in poor health: had no charge." Thus his Master's work was ever before him.
For several years before his death he was greatly afflicted, and was rendered wholly unable to labor or even to exercise and direct himself about his own house. The better emotional qualities of Rev. A. G. Anderson were well cultivated, and were always an index to the noble soul that was in him. His convictions on all important questions were well fixed and he contended strongly for what he believed to be right. He was a true friend to the church of his choice.

The following is from The Heritage of Caswell County, North Carolina, Jeannine D. Whitlow, Editor (1985) at 90 -91 (Article #18, "Some Grandchildren of John Anderson" by James E. and Sallie P. Anderson):

Unknown is which wife had which child. Accordingly, all children are shown as by the first wife, Mary E. Thatch. 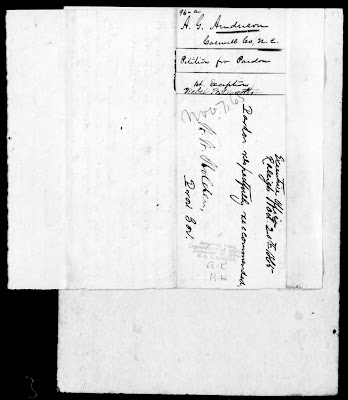 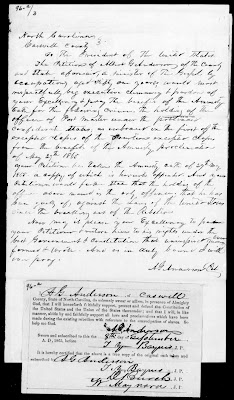 South Carolina, Mississippi, Florida, Alabama, Georgia, Louisiana, and Texas already had seceded from the Nation. In the following months, Virginia, Arkansas, North Carolina, and most of Tennessee followed suit. Reagan instructed southern postmasters to continue to render their accounts to the United States as before until the Confederate postal system was organized. Meanwhile, he sent job offers to southern men in the Post Office Department in Washington. Many accepted and brought along their expertise, as well as copies of postal reports, forms in use, postal maps, etc.

In May 1861, Reagan issued a proclamation stating that he would officially assume control of the postal service of the Confederate States on June 1, 1861. Postmaster General Blair responded by ordering the cessation of United States mail service throughout the South on May 31, 1861.

Although an able administrator headed the Confederate Post Office Department, its mail service was continuously interrupted. Through a combination of pay and personnel cuts, postage rate increases, and the streamlining of mail routes, Reagan eliminated the deficit that existed in the postal service in the South. But blockades and the invading army from the North, as well as a growing scarcity of postage stamps, severely hampered postal operations.

The resumption of federal mail service in the southern states took place gradually as the war came to an end. By November 15, 1865, 241 mail routes had been restored in southern states; by November 1, 1866, 3,234 post offices out of 8,902 were returned to federal control in the South.

Postmaster General Reagan was arrested at the end of the war but later was pardoned and eventually made it back to Congress, where he became chairman of the Committee on Post Offices and Post Roads.