The connection of William Bryant, who died c. 1769, to Caswell County, is through his son Rowland Bryant.

John Greene Murphey was a son of Archibald Murphey and Jane Debow, thus being a brother of the famous Archibald Debow Murphey. 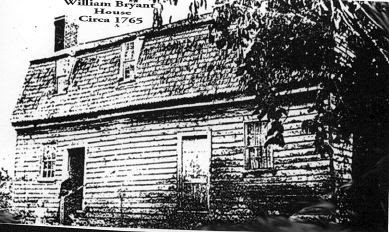 On the 21st day of October, 1773, "at a Court Call'd and Held in Granville County for the Trial of Certain Negro Slaves..."; justices present were Robert Harris, Jonathan Kittrell, Sherwood Harris, Esquires. Also Thomas Chrichter, Christopher Harris, Samuel Waller and William Hunt, freeholders. Sanders, a slave belonging to Joseph McDaniel, pleaded not guilty. Ned, the property of William Bryant, deceased, testified that Sanders had a gun "in the night and had uttered some threatening language, though did not mention any person in particular". Then Jacob, the property of Jonathan Kittrell, Esq., repeated that at the place of execution the guilty man would be burned alive until consumed. Finally, Bryant's own slave, who apparently had aided and abetted, was sentenced to 39 lashes at the public whipping post. At that time there was a punishment in place for a slave who killed his master but not for a slave who killed another white person so the Colonial Records show that they made up the new punishment because of this case. What this punishment was is unknown.

Miss Lucy Kittrell of Texas, a descendant of William Bryant through his daughter, Tabitha (Bryant) Kittrell, has in her collection of papers, a letter written to her in about 1914 by a relative, Edwin Sue Goree. It adds personal detail to the Granville court case. The story goes that Sanders, an unfriendly slave belonging to a Mr. McDaniel who lived on one side of William Bryant, was married to a woman who lived on the plantation of Bryant's son-in-law, Pomfrett Herndon. William Bryant told the man to use the road several times and to stop crossing the Bryant property. This angered Sanders who, in turn, stole a gun from Pomfrett Herndon and shot William Bryant one evening as he sat in the doorway of his home. The slave, who could not be found for a while, was eventually discovered under the Bryant home.

Edwin Sue Goree wrote in an old letter that the house was still standing (in 1914 or so) and that after all these years no amount of scrubbing with water and sand could remove William Bryant's blood from the floor. She also noted that there were two Bryant sisters still living in the old homeplace, which had been moved up the hill a bit. It must have been remodeled at some point as the description she gave was "Queen Ann", but then wrote that the original large colonial fireplace and surrounding paneling remained.

The widow Elizabeth Bryant and her children removed to Chatham and Orange Counties, North Carolina, with the exception of her sons William, Jr. and Roland/Rowland, who remained in Granville. Her son by her first marriage, John Fearrington, is first noted in the 1771 militia list of Chatham County. He became a large land owner and built a handsome house, still standing near Mann's Chapel Church.
_______________

GOREE, EDWIN SUE (1884-1961). Edwin Sue Goree, library organizer, daughter of Robert Daniel and Frances Rebecca (Campbell) Goree, was born on May 14, 1884, in Thorp Springs, Texas. She attended the University of Texas from 1901 to 1903 and began her career as a librarian there in 1908. From 1915 to 1917 she was librarian of the university's Department of Extension Loan Library. During World War Iqv she joined the American Library Association War Service as a hospital librarian at Camp Bowie (Tarrant County) and Fort Bliss. From 1923 to 1930 she was librarian of the Woman's Board of Trade Library in Santa Fe, New Mexico.

Goree returned to Texas as library organizer for the Texas State Libraryqv in 1931 and devoted the next nine years to promoting the establishment of county libraries and the improvement of local library service. She traveled around the state speaking to groups, visiting libraries and clubs, and organizing exhibits. She wrote articles and led institutes to educate citizens about obtaining library service. She established demonstration library collections which the State Library lent to small towns without libraries. In 1937 she resigned to become the executive secretary of the Texas Library Associationqv in order to lead campaigns for stronger library legislation. She held this post again in 1938-39. She assisted in the organization of the People's Library Movement, a predecessor of Friends of Texas Libraries. In 1941 she became the founding librarian of the United States Naval Air Station Library in Corpus Christi, where she remained until 1946. She ended her career in the Burnet County Free Library, where she worked from 1949 to 1957.

Edwin Sue Goree was an Episcopalian and a Democrat. In 1960 she received the first Texas Library Association Distinguished Service Award. She died in Fort Worth on June 11, 1961.