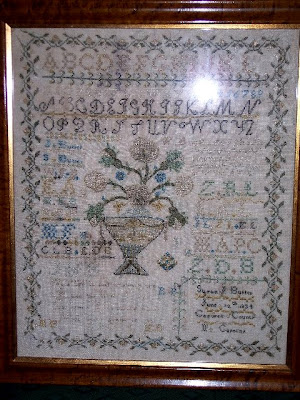 The sampler pictured above will be auctioned at Mebane Antique Auction Gallery's December Americana Sale on Friday 14 December 2007. Set forth below is some information on Susan Jane Butler and her family.
_______________

Susan’s younger sister, Emiline (“Emily“), married Joseph W. Nance June 4, 1853, in Caswell County. Joseph Nance was a “tobacconist” from Yadkin County, North Carolina. They had at least three children, Mildred born in 1855, Cora born in 1858, and Bettie born in 1861. Joseph Nance died October 25, 1864, of disease while being held as a prisoner of war at Elmira, New York. He was a full Corporal serving during the Civil War in Company F, 28th North Carolina Infantry Regiment. Emily Butler Nance brought her three daughters back home to Caswell County after the Civil War.

Susan’s youngest sister Mariah was not married by 1870 and still lived at home.

Joshua Butler, father of Susan Jane Butler, was born c.1797 in Guilford County, North Carolina. He was the son of Zachariah Gray Taylor and Elizabeth Driskill Butler. He served in the 11th Company, Caswell County Regiment in 1812. Joshua Butler married Susan Lovelace about 1818 in North Carolina. Susan Lovelace was born in Virginia, the daughter of James and Violet Webster Lovelace. Joshua Butler farmed in the Locust Hill area of Caswell County. He is listed as a “tobacconist” in the 1850 Census. Joshua and Susan Lovelace Butler had at least 5 children:

2. Susan Jane Butler (born 1822) did not marry and lived with her parents.

* The basis for ascribing the Brown surname to the wife of William Butler is the following, which is from The Heritage of Caswell County, North Carolina, Jeannine D. Whitlow, Editor (1985) at 138 (Article #99, "Family of Jefferson Davis Butler" by Iola B. Murphy):

Jefferson Davis Butler was born Oct. 12, 1861. His parents were William R. and Katurah Brown Butler. William Butler was born in Pittsylvania Co., Va. As a young man, he went to visit relatives who lived near St. Louis, Mo. While there, he met and fell in love with Katurah Brown, After much letter-writing and a train trip or two, they were married. After marrying, they lived in Caswell Co. They had eight children: Susan, Mattie, Bettie, Preston, John, James, Jefferson Davis "Jeff" and a young son who died early in life.

Jeff Butler, so called as a young man, went to visit his sister Susan one day. Susan had married Richard Graham and lived between Griers Presbyterian Church and Frogsboro. While there, he met Floretta Smith, a daughter of William Hill and Mary Dameron Smith. She was born Jan. 7, 1871. Jeff courted her for over two years before the were married. The settled in the community and had four children: Hurley Oscar, Elwood Marvin, Bertha Lea and Iola Dalice Butler.