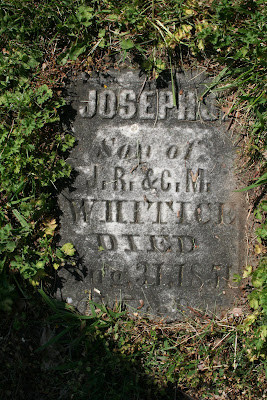 Above is a gravestone in the First Baptist Church of Yanceyville cemetery (Yanceyville, Caswell County, North Carolina). It is located in the section that contains some of the oldest graves in the cemetery and has for many years been a mystery. Here is the inscription:

Who were the parents, J. R. Whitice and C. M. Whitice? As this is the only Whitice buried in this cemetery, where were his parents buried?

Just this week additional information came to light. A Caswell County native whose family owns property on the County Home Road (just outside Yanceyville) informed the Caswell County Historical Association that a gravestone was located on their farm. The inscription showed:

As Whitice was not a common Caswell County name, it appeared that this Joseph R. Whitice could be the father of the Joseph J. Whitice buried in the First Baptist Church of Yanceyville cemetery. Locating the following marriage record helped unravel the mystery:

Now we had a possible mother, Catharine Dodson Whitice. This is consistent with the gravestone inscription of the child, which showed "C. M. Whitice." For what the "M" stands is not known.

The next helpful record was:

Thus, it is reasonable to conclude that the parents of Joseph J. Whitice (1845-1851), whose gravestone is shown above (First Baptist Church of Yanceyville), were:

These researchers also showed John A. Graves and Catherine M. D. Whittick having a daughter named Mary Johns Graves. The only John A. Graves in the CCHA database with a daughter named Mary Johns Graves (also seen as Mary E. Graves) is John Azariah Graves (born c. 1823). He is the son of William Graves (1780-1845) and Ann Lea Graves (b. 1794). Thus, while not satisfactorily documented, a reasonable working hypothesis is that the second husband of Catherine M. Dodson Whitice was John Azariah Graves, who was a prominent lawyer in Yanceyville, North Carolina.

And, the 1850 US Census (Yanceyville, Caswell County) helps bring all the pieces together. In 1850, James Poteat and his wife Isabella were operating the Poteat Hotel in Yanceyville, North Carolina. Listed among their boarders in the 1850 US Census were John A. and Catherine Graves (27 and 23, respectively). John A. Graves was shown as a lawyer, with both John and Catherine born in Caswell County. Apparently associated with them was one-year-old Mary E. Graves, possibly their daughter. A four-year-old Joseph J. Whitice may also have been part of their household. It is possible (likely), as explored above, that this Joseph J. Whitice was the child of Catherine M. Dodson and Joseph R. Whitice.

Much of the foregoing lacks the documentation required to form solid conclusions with respect to the familial relationships. However, the assumptions made appear reasonable. Do you know more about this family? If so, please share it here or at the CCHA Message Board.

Permalink
Posted by RSF at 5:22 PM