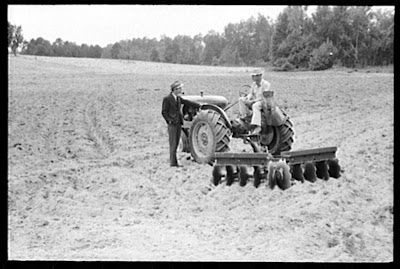 Connie Barriot Gay was born 22 August 1914 in Lizard Lick, North Carolina (about twenty miles east of Raleigh, in Wake County). He died 4 December 1989. In 1980, he was inducted into the Country Music Hall of Fame. During 1940 Gay apparently was the Agriculture Extension Agent assigned to Caswell County, North Carolina.

Above is a 1940 photograph of Connie B. Gay, Caswell County FSA (Farm Security Administration) county supervisor talking to Emery Hooper* about his tractor and disc plow purchased with a FSA cooperative community service loan. The location is near Prospect Hill, Caswell County, North Carolina.

After leaving Caswell County, Connie B. Gay went on to have a successful career in the country music industry. Gay may have been succeeded as Caswell County Agricultural Extension Agent by Ralph Mimms Aldridge (1917-1993), as the Aldridge family recalls that Ralph Aldridge spoke often of Connie B. Gay.

The following is from the Country Music Hall of Fame and Museum Website:

Connie Barriot Gay was one of country’s leading entrepreneurs of the 1950s, playing a seminal role in transforming what was still called “hillbilly” music into a modern entertainment industry in just one decade from his base in the Washington, D.C.–Virginia area. Gay was one of the first to coin the term country music, in place of the less flattering hillbilly music.

Gay got his start in radio broadcasting on the Farm Security Administration’s National Farm and Home Hour. Later, at WARL, Gay helped popularize country music in Washington, D.C., where he nurtured a vibrant, profitable music scene beginning in 1946 through the 1950s. His activities spanned TV and radio, as well as live stage shows in the blockbuster mode, using the all-purpose moniker Town & Country. His early stable of talent included the Wheeler Brothers, Clyde Moody and the Radio Ranchmen with guitarist Billy Grammer, Grandpa and Ramona Jones, Hank Penny, and a then unknown Jimmy Dean.

Gay took over the management of Dean, whom he developed into a TV star and host of the regionally popular Town & Country Time show and the short-lived CBS effort, The Jimmy Dean Show (1957–1959), until Dean and Gay split in 1959. In his heyday Gay’s steady roster of talent included, besides Dean, Patsy Cline (who made her TV debut on Gay’s Town & Country TV shows), Roy Clark, and George Hamilton IV. 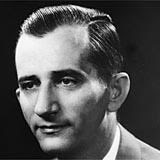 Connie B. Gay got his start in radio broadcasting on the Farm
Security Administration’s National Farm and Home Hour, in the 40’s. In
1946, Gay contacted Frank Blair, the Program Director of WARL
Arlington, Virginia and got a mid-day Country show. Gay took a
percentage of the advertising revenue instead of a salary and He
registered the name Town and Country. The trademark name, "Town
and Country", was instrumental in changing the image of “Hill Billy"
music to a more "uptown" one. WARL became the first urban radio
station to have a full-time Country format.

Connie B. Gay’s activities spanned TV, radio, and live stage shows,
produced under the Town and Country trademark. On October 31,
1947, he booked the DAR’s Constitution Hall for two Country shows
headlined by Eddy Arnold. Both shows were sold out with thousands
turned away. Gay started to work closely with Jim Denny the General
Manager of the Grand Ole Opry and probably the most important man
in Country music.

Through this connection, Gay was able to have the monopoly on Opry
acts for the mid-Atlantic region. The following year, he gave 26
straight sold-out shows at Constitution Hall. The shows were
broadcast regionally by WNBW-TV and other NBC affiliates. Gay was
asked to take his shows some place else. After that he took his acts
everywhere , including amusement parks, the National Guard Armory
and County fairs. In 1949 he promoted the Watergate concert, which
drew 15,000 fans , and the Hillbilly Air Show at the Bailey’s
Crossroads’ Airport.

Gay started offering weekend train tours to Nashville to visit the Grand
Ole Opry. In 1950, Gay teamed up with the Wilson Line and began
"Hillbilly Moonlight Cruises," which operated on the Potomac. Then In
September 1951, Gay staged a star-packed show at Griffith Stadium in
Washington, D.C., which included Ernest Tubb, Lefty Frizzell, Carl
Smith, Hank Snow and Flatt & Scruggs. The show drew a record
14,000 crowd. He teamed up with Denny for a six-city promotion on
New Year’s Eve, 1951.
In 1952, Gay joined forces with the Department of Defense to organize
Special Services Road Shows, which brought Country music to other
parts of the world.

Gay discovered Patsy Cline In 1954, at the National Country Music
Championships in Warrenton.
In 1957, Gay had to face up to an increasing dependency on alcohol.
He withdrew from Country music in 1959 to recover from his alcohol
dependency. He remarried in 1961 and his new wife put his money into
more cautious investments. At his hight , Gay’s radio empire included
Town and Country Jamboree, which came from the Capitol Arena,
Washington, D.C. Every week, Town and Country Time, which featured
Roy Clark and was produced for RCA and in 1957, and Country Style,
with Jimmy Dean, on WTOP-T.V. Washington, D.C.

Some of his earlier acts that Gay showcased included the Wheeler
Brothers, Clyde Moody and the Radio Ranchmen with guitarist Billy
Grammer, Grandpa and Ramona Jones, Hank Penny, and Jimmy Dean.
Gay managed Dean, who he developed into a TV host of the regionally
popular Town and Country Time show and the short-lived The Jimmy
Dean Show (1957–1959) on CBS. Besides Dean, Gay’s roster of talent
included, Patsy Cline (who made her TV debut on Gay’s Town and
Country T.V. shows), Roy Clark, and George Hamilton IV.

Permalink
Posted by RSF at 9:39 PM