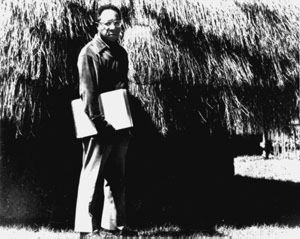 "Chicken" George, made famous in the Alex Haley novel Roots: The Saga of an American Family (1976), purportedly was born in Caswell County, North Carolina, the illegitimate son of slaveowner Tom Lea and his female slave Kizzy Kinte Waller, daughter of Kunta (Toby) Kinte and his wife Bell. For a synopsis of the novel go to Roots. Above is a photograph of Alex Haley.

However, the genealogical research done by Haley in support of his novel, the essential facts of which he claimed were true, has been severely criticized. To see some of this criticism go to Roots Revisited.

For example, an article by Elizabeth Shown Mills and Gary B. Mills in National Genealogical Society Quarterly (March 1984) states that Tom Lea, the slaveowner who Haley says fathered Kizzy's child "Chicken" George, did not own the other slaves that Haley says he owned. There are also other, chronological problems with the account of George's escape from his father's (Tom Lea) ownership.

Also recall that in the novel a John Waller of Spotsylvania County, Virginia, purchased Kunta Kinte at auction and was responsible for cutting off part of the slave's foot to discourage his running away. Mills and Mills show a connection that Haley missed between the Wallers of Virginia and the Leas of North Carolina—the Leas had come from the same corner of Spotsylvania County (the two families may have been related). Also, the Waller family of Virginia did own a crippled slave (recall the scene where "Toby" is maimed for his escape attempt), but it was not Toby. It was a man called Hoping [Hopping] George, who was owned by Colonel William Waller—father of brothers William and John Waller whom Haley believed to have owned Kunta Kinte. As "George" was a name common in Alex Haley's family, and Colonel William Waller also owned a slave named Isabell (Kinte's wife was supposedly named "Bell"), this might have been the true ancestor of Haley.


Approaching 70 when "Roots" debuted, Harold Courlander was shocked to read it. For the previous 30 years or more, Courlander had been traveling the world collecting folk tales and writing about his findings.

In 1978, Courlander sued Haley in a U.S. District Court in New York for copyright infringement. The suit cited 81 passages that had been lifted from Courlander's "The African," as well as the plot and certain characters. Haley's defense fell apart when, during discovery, the plaintiff's lawyers found three quotes from "The African" among his typed notes, notes that he had apparently failed to destroy.

The last thing the judge wanted to do was to undermine a newly ascendant black hero. Midway through the trial, he counseled Haley and his attorneys that he would have to contemplate a perjury charge unless they settled with Courlander. They did just that to the tune of $650,000, or about $2 million by 2005 standards. In return, Courlander agreed to keep quiet about the suit, which he did until he died in 1996.

The media paid scant attention to the suit and even then failed to explore the real gist of the scandal: namely that the author of a "nonfiction" book plagiarized from a fictional one.

In the late 1970s, two leading genealogists, Gary Mills and Elizabeth Shown Mills, decided to follow up on Haley's work through the relevant archives in Virginia, North Carolina and Maryland. They found that Haley, like most amateur genealogists, made mistakes. But they found, too, that his transgressions went well beyond mere mistakes. "We expected ineptitude, but not subterfuge," observed Elizabeth, herself the editor of the National Genealogical Society Quarterly.

The records showed that in the pre-Civil War period, Haley got virtually everything wrong. In "Roots," for instance, Haley tells in great excited detail how he tracked down the very ship that Kunta Kinte had taken from the Gambia to 'Naplis, the Lord Ligonier in 1767, the very year that "the King's soldiers came" to the Gambia. In fact, as the Mills discovered, the man that Haley identifies as Kunta Kinte, a slave by the name of Toby in the possession of the John Waller family, could not have been Kunta Kinte or Haley's ancestor. Toby had been in America as early as 1762, five years before the Lord Ligonier arrived. Worse for Haley, Toby died eight years before his presumed daughter Kizzy was born.

Still, neither the lawsuit nor the unraveling of the genealogy dimmed Haley's star while he was alive.. The book and video remained a staple in history classes across America. The Pulitzer remained in his trophy case. And the awards and the money continued to roll in.

In 1993, a year after Haley's death, literary detective Philip Nobile did his best to blow the whistle on what he calls "one of the great literary hoaxes of modern times." In February of that year, he published "Uncovering Roots" in the influential alternative publication, the Village Voice. The article brought to a larger public the story of the Courlander suit and the Mills' genealogy. Nobile also revealed that Haley's editor at Playboy magazine, the very white and Jewish Murray Fisher, did much of the book's writing.

In the British Isles, the Nobile expose was a big story. It got serious coverage in all the major newspapers, and the BBC later made a documentary. The American cultural establishment, however, continued to turn its back on the story. The New York Times had exactly this to say about the controversy:

Two weeks ago, the charges about the authenticity of "Roots" and the integrity of Mr. Haley were raised anew in an investigative article by Philip Nobile in the Village Voice. Members of the Haley family have rebutted the accusations.

And that was that.

Roots Was a Fraud