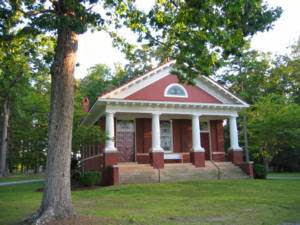 A crisp, clear morning greeted members of Caswell County's Red House Presbyterian Church who, along with more than three hundred friends, family and members of other area churches, gathered Sunday for a celebration of the church's 250th anniversary.

Attendees at the event's 10 a.m. service sat in folding chairs under a large tent that was erected on the church property site of the church's first sanctuary to listen to a sermon by minister Kathryn Summers-Bean and to gaze across Red House's beautiful cemetery as sunbeams danced on the headstones of congregation members who worshipped at Red House at various times over the past two-and-a-half centuries.


Presbyterian minister Hugh McAden, a graduate of what is now Princeton University, arrived to preach in the Red House community in 1755.

Historical records state that British General Charles Cornwallis and other British Revolutionary War soldiers camped on the grounds of Red House Church in 1781 during the course of U.S. General Nathanael Greene's famous "Race to the Dan."

McAden died around this time, and, as Presbyterians were believed to have been at the forefront of the British resistance, British soldiers not only burned Red House Church but burned McAden's home and library and desecrated his grave as well.

Recognition of Red House's 250th anniversary has actually been a year-long event, church member Cathy Long told attendees, with members of all ages sharing bits of the church's history at its biweekly services.

Members donated $3,000 so that a Mexican sister church could replace its roof and collected items for scrapbooks and for a Red House time capsule that will be opened on the church's 300th birthday.

On Sunday, an 1839 pulpit Bible, an old Red House Session Book maintained in neat cursive handwriting, a pair of silver-plated, gold-lined communion cups and other items of significance throughout the church's rich history were on display inside the church.

As she urged attendees to "run a race" of discipleship, love, life and faith, Summers-Bean reflected on how even the church's most steadfast members over the years had likely experienced defeats and frustrations.

Thomas Jeffreys of Caswell County to John McCain and Loften Walton, Elders and Trustees of the Presbyterian Congregation of the red house, for $1, 1 1/2 acres adjacent to land granted by Hugh Dobbin to Archibald Murphey et al where the old meeting house stood, said land on which a new meeting house has been erected. 10 October 1823. Witnesses: James Rainey, John B. Farley.