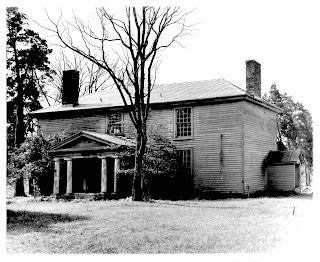 A small apartment converted from an ice house right behind the residence, as well as a substantial gazebo, were damaged by the heat.

“The owners were out of town. They were called and got back here in approximately an hour,” said Briggs.

A 25-year-resident of Milton, Briggs called the fire “a tragic loss. It was a beautiful home.” Five fire departments responded to the scene: Milton, Semora, Providence, Leasburg, and Ceffo (from Person County).

“It took about two hours to bring it under control,” said Briggs. We’ve been here all night keeping hot spots down, and we’ll probably be here all day (Friday).”

According to a Caswell Messenger article from September 1976 – when Longwood was named to the National Register of Historic Places – the home was part of a 640-acre land parcel granted to Major Thomas Donoho in 1779 by North Carolina’s first governor, Richard Caswell. The home itself was built around 1855, in three stages. First was a small building, followed by a Federal-style handcrafted addition. Finally, a Greek Revival addition was built. It was named after the home of Napoleon Bonaparte at St. Helena. At one time, Longwood was the residence of Romulus M. Saunders, a minister to Spain from 1846-1849. The Caswell County native was also U.S. Congressman and judge, and a very powerful political figure. Longwood remained in possession of the Saunders and Donoho families who were related – until the last remaining member of the T.A. Donoho family died in 1954.

The house was vacant for the next 20 years, until Averett College professor and Yanceyville artist Maud Gatewood, and physician Dr. Bea Gatling bought the property. The two women began restoring it in July 1975 to its former glory, based on research. Gatewood had a tobacco barn, an original log corn crib and a cook house remodeled into her art studio. Gatling added a greenhouse, a well house, and a small log barn for animals. When Longwood was named to the National Register, Gatewood and Gatlin invited the Milton Woman’s Club to hold a tour of the home and its outbuildings. More than 700 people showed up for the event, so it began earlier than scheduled. More recently, Mancuso Realty reported that Longwood had 3,400 square feet of living space, including three bedrooms and two-and-a-half bathrooms.

According to Ruth Little-Stokes in An Inventory of Historic Architecture–Caswell County, “the two-story frame plantation house was built in three stages. The Greek Revival wing represents one of the most complete survivals of Greek Revival woodwork in the idiom attributed to Thomas Day,”.
_______________

Description of "Longwood" from An Inventory of Historic Architecture -- Caswell County, North Carolina, Ruth Little-Stokes (1979) at 138:

Photo 189. Romulus Saunders House (Longwood). Late 18th, early 19th century, ca. 1855. Antebellum 2-story frame plantation house built in three stages. The Greek Revival wing represents one of the most complete survivals of Greek Revival woodwork in the idiom attributed to Thomas Day, Saunders, a Caswell County native who became one of the state's most influential 19th century politicians, serving as United States Congressman, judge, and minister to Spain from 1846-1850, is believed to have lived at Longwood early in his career.

"Longwood" also was once owned by Yanceyville artist Maud Gatewood and Dr. H. Bee Gatling, M.D.,, who purportedly did substantial restoration work to the structure. The property obtained new owners as of 1 September 2005.

Set forth below is an additional description of Longwood (Courtesy of Mancuso Realty of Danville, Virginia):

The gated driveway leads to the federal-style home located near Milton, North Carolina, on Highway 62 that connects to nearby Yanceyville, North Carolina. The mellow exterior clapboarding and shuttered symmetrical windows are balanced by Greek Revival porches on two facades, each featuring four massive columns. Fenced and situated on 5.7 acres of trees and colossal boxwoods, the property includes a glass-paneled greenhouse.

The dependencies include a one-stall stable with fenced pasture, an unfinished servant quarters, two restored hand-hewn log homes (each with one bedroom and bath), and one restored clapboard residence (with one bedroom and bath). The home has an historic marker noting its landmark designation in North Carolina. The property was once owned by Romulus Mitchell Saunders, who served as U.S. Minister to Spain from 1845-49, as well as N.C. judge and congressman, and was a major political leader of his time.

The mantels are attributed to Thomas Day, an acclaimed free black cabinet and furniture maker, whose home and work shop (Union Tavern) is being restored as a museum in Milton. The formal dining room features Palladian-styled built-in cabinets framing the fireplace mantel. A breakfast room enhances the kitchen as well as a screened back porch. The front foyer and handsome stairwell are lighted by a carriage lamp chandelier. Renowned Southern artist, Maud Gatewood, who lived at Longwood, restored the home and its dependencies.

The house was the home of the Donoho family until November 1954 when the last surviving child of Thomas A. Donoho and Christina Isabella Glenn Garland died. It was once the home of Romulus Saunders, who traded it to Dr. John Tabb Garland. And, it presumably is through this ownership that the property came into the hands of the Donoho family. The daughter of Dr. Garland, Isabella Glenn Garland, married Thomas A. Donoho. The 1850 US Census shows Dr. John Tabb Garland with substantial personal assets.
_______________

The plantation known as Longwood, sited on a hill above N.C. 62 southwest of the village of Milton, includes a two-story frame L-shaped house, a frame kitchen, log corn crib, log tenant house and log tobacco barn. The large house is an amalgam of three eras of construction: early, Federal, and Greek Revival. A path of ancient cedar trees leads to the main entrance of the south block, a Federal style house four bays wide and one deep.A path lined with large boxwoods leads to the main entrance of the north wing, a Greek Revival addition two bays wide and one deep. The west side first-story room, whose frame is independent of the frame of the east side of this section, apparently predates the east section and was the original house. The framework, including exposed, beaded ceiling joists, and the fieldstone foundation are the only visible remnants of this earliest stage, which was almost completely overbuilt during the Greek Revival stage.

"I loved the home ["Longwood"], too. My family bought Woodside in ca. 1980 when it was available for $16,000. Restoring it cost about $200,000. Chip Callaway (then at UNCG) brought Architectural (exterior and interior) students to study Longwood (already restored) and Woodside (no restoration). Their class project was to recommend what to do to Woodside and with it. I thought Longwood and Woodside were the same size but Chip explained that Greek Revival home were so carefully and skillfully measured that the size is hard to easily determine. The window panes are identical in size. Longwood's window panes were 9x9 at top and bottom - Woodside's window panes were 12x12 at top and bottom. I always wished that more of the beautiful homes around Caswell County had been preserved. Not only the beauty of the homes, but the rich (I don't mean wealthy) history of Caswell County. I lived there more than 40 years and truly loved it. I am currently living in Alamance County (my husband's home county). His Richmond family came from VA to Caswell County before the American Revolution and settled somewhere in the Leasburg area that was named the Richmond District before they developed the current areas names. My home territory is Hoke County, and my family history there began via my mother from the Ray/Black family after they fought the Culloden battle and saved their skins by finding new homes in NC and via my Parker/Gibson kin"